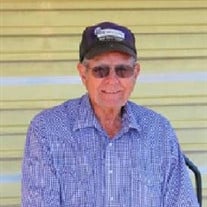 Duane L. Bohm, age 89 of Ottawa, KS and formerly of the Elk Falls area, passed away October 11, 2020 at his home. Duane was born August 5, 1931 on the family farm north of Athol, KS to Frederick and Viola (Smith) Bohm. He grew up with 2 brothers and 1 sister, attending school in Athol and graduating from Athol High School in 1949. He then attended KSU in Manhattan for 2 years. On August 17, 1952, he married Alice Rogers in Franklin, NE. Together they had 2 children, and were married 51 years, until her passing in January 2004. On June 12, 2010, Duane then married Shirley Fisher Sweet in Elk Falls, KS. They have enjoyed the last 10 years together. As a young man, Duane fell in love with farming and hoped to make that his career path like his father. Health issues didn’t allow him to continue on the farm, but he never forgot his passion for the land. He would spend weekends out on the farm in Elk County, bringing the entire family with him. He worked in the aerospace industry in Wichita as an engineer, working for several different companies throughout his career. He even continued doing contract work for some of them in Texas and Seattle after retiring. In the early 90s, he was able to move to the Elk Falls area and spend time on the farm tinkering on machinery and just enjoying the land. He was active in the Friends of Elk Falls, helping restore things around town, and the Elk Falls United Methodist Church. He loved woodworking and was known for his woodcarvings. Later in life, he and Shirley moved to Ottawa, KS to a retirement village. Duane is survived by his wife, Shirley Son, Clayton (Debby) Bohm of Garden City, MO Daughter, Karen (Russ) Vallier of Chanute, KS Step-Son, Brian (Debi) Sweet of Chapman, KS Step-Son, Tom (Christie) Sweet of Edgerton, MO Brother, Ross (Beverly) Bohm of Yuma, CO 3 Grandchildren, 5 Great-Grandchildren 9 Step-Grandchildren, 2 Step-Great-Grandchildren Many nieces and nephews He was preceded in death by his parents, wife, Alice Marie, brother Wendell Bohm and sister Dolores Lyon. Graveside service will be held on Thursday, October 15, 2020 at 11:00 am at the Elk Falls Cemetery, Elk Fall, KS The family will receive friends at visitation on Wednesday, October 14, 2020 from 4 to 6 pm at Countryside Funeral Home, 206 E. Washington, Howard, KS 67349 Memorial contributions can be made to the Elk Falls United Methodist Church and can be mailed to or left with the funeral home. Services entrusted to: Countryside Funeral Home, 206 E. Washington, PO Box 1233, Howard, KS 67349

Duane L. Bohm, age 89 of Ottawa, KS and formerly of the Elk Falls area, passed away October 11, 2020 at his home. Duane was born August 5, 1931 on the family farm north of Athol, KS to Frederick and Viola (Smith) Bohm. He grew up with 2... View Obituary & Service Information

The family of Duane L. Bohm created this Life Tributes page to make it easy to share your memories.

Send flowers to the Bohm family.