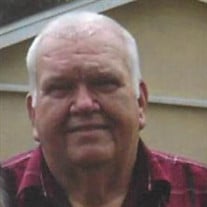 Edward “Eddie” Jay, age 82 of Burden, KS, passed away Saturday, November 28, 2020 at his home. Eddie was born November 6, 1938 in Howard, KS to Emery and Mary (Cole) Jay. He was raised alongside 3 brothers and attended school in Howard. Eddie always remembered his mom fixing supper during the afternoon hours, but to keep the boys out of it, she would put a padlock on the refrigerator to keep them out of the food until dad got home for supper. On May 23, 1961, Eddie married Dorothy Vestal in Howard, KS. They spent the next 59 years together, raising 2 daughters, Debbie and Susie. They moved a couple of times between Howard and Burden while raising their family, but have called Burden home for the last several years. Eddie was a mechanic for a time, and a semi-truck driver, which he enjoyed taking his wife with him while driving and later taking his grandsons Clayton and Joshua in the truck with him. Eddie had many enjoyments in life which included racing his dirt track stock race car at tracks in Wichita, Yates Center, Caney, and Dewey, OK. He also enjoyed camping, driving his RV, fishing, deer watching, and watching eagles at the lake, but his true love was his family. He loved spending time camping with his grandkids, and even retired early in order to be at home to help raise his grandson, Clayton. Eddie is survived by his wife Dorothy of the home Daughters: Debbie Armstrong and husband Rodger of Independence, KS Susie Jay of Grenola, KS Grandchildren: Nicole Beasley Clayton Jay Joshua Jay Great-Grandson, Leo Ford He was preceded in death by his parents, 3 brothers, Harold, Virgil, and Joe, sister, Thelma, and nephew, Larry Funeral service will be held on Wednesday, December 2, 2020 at 11:00am at Countryside Funeral Home, 206 E. Washington, Howard, KS 67349. Visitation will be held from 10:00 - 110:00 am prior to service. Interment to follow in Longton Cemetery, Longton, KS Memorial contributions can be made to the William Newton Memorial Hospital and can be mailed to or left with the funeral home. Services entrusted to: Countryside Funeral Home, 206 E. Washington, PO Box 1233, Howard, KS 67349

The family of Edward "Eddie" Jay created this Life Tributes page to make it easy to share your memories.

Send flowers to the Jay family.