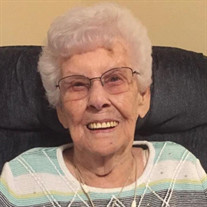 Edythe Lucille “Lou” Marshall (Myers) was 93 when she was called home on October 6, 2021. Lou was born in Edgemont, Maryland on May 20, 1928 to Albert Robert Myers and Elsie Mae Myers (Schilt). She lived in the area until she moved to Funkstown, MD and made her way to Kansas to visit her sister when she was 20. She worked at Ray’s Diner (now the Downtown Grill) after arriving in Fredonia and she soon met what she describes as an “arrogant so and so” that went by the name of Tuffy Marshall. They married on April 3, 1949. The couple remained in Fredonia where they raised their three girls. Lou worked for Dr. Bayles, was a member of the 1910 club, delivered Meals on Wheels for more than 25 years, and was proud to be a long-time member of the First Assembly of God Church, now known as Grace First. Lou will be remembered as a wonderful and faithful Wife, loving and supportive Mother, doting Grandmother, and caring Great-Grandmother. She was crazy at times, never without a snarky comment, and she kept everyone in her life on their toes. The world was a better place with her in it and with her looking down on it. She is survived by her daughters, Roxie Marrs and husband Holden of Verdigris, OK and Kim Messer and husband Rick of Montreal, MO, her Grandchildren, Joe Weatherby, Brent Weatherby (Shanda), Miranda Weatherby, Terry Mason (Kaylee) of Fredonia, KS, Kendra Emmich (Kenny) of Caldwell, NJ, Layna Dugan (Joel) of Ashburn, VA, Nathan Marrs (Sophie) of Fort Collins, CO, and her many beloved Great-Grandchildren. As well as extended family members, and friends she cherished greatly. She was preceded in death by her parents, her brothers Allen, Charles, Bob, Elmer, and Walter, her sisters Catherine and Maybelle, her husband Charles “Tuffy” Marshall, and her daughter Denny Mason. Funeral Services will be held on Wednesday, October 13, 2021 at 2:00pm at Countryside Funeral Home in Fredonia with burial to follow at Fredonia City Cemetery. In lieu of flowers contributions to Meals on Wheels or the Morningstar Care Home would be appreciated. Services Entrusted to Countryside Funeral Home, 420 S. 20th St. P.O. Box 247, Fredonia, KS 66736.

The family of Edythe "Lou" Marshall created this Life Tributes page to make it easy to share your memories.

Edythe Lucille “Lou” Marshall (Myers) was 93 when she was called...

Send flowers to the Marshall family.