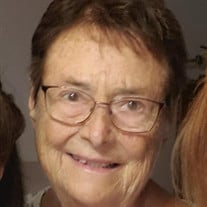 Elaine Carlson Dunlap traded her earthly tethers for wings of gold on the morning of November 19, 2020, age 81 in Bolivar, Missouri surrounded by friends and family. She accepted Christ as her Savior at a young age and quietly prayed for her entire family constantly. It was her continued profession of faith during those last few days that are most meaningful to her friends and family. Her loved ones mourn her passing but they are hopeful now that someone else can actually win games of Pitch. Elaine was born in 1939 to Oscar Frank and Signild Marie Nilsson Carlson. Growing up in the Elsmore, KS community, she attended Elsmore Grade and Rural High Schools and starred at women’s basketball during her high school years. She became a lifelong fan of the sport, especially KU basketball. After graduating high school in 1957, she worked a number of jobs in southeast Kansas, including Western Insurance, Humboldt Brick & Tile, H. L. Miller Dress Factory, Farmers Discount, Yachry Construction, and finally the United States Postal Service. At the USPS, she become the first woman letter carrier in Chanute, breaking many male stereotypes. Elaine retired from the USPS after 31 years. Her treasured Swedish ancestry is evidenced in her strong work ethic. She loved hosting family and friends at Grand Lake in Oklahoma and Pomme de Terre lake in Missouri before settling in Bolivar, MO to be near her children. On August 24, 1958, she married R. Milton Dunlap. Together they raised two daughters and one son, Karen (Dunlap) Kurtz and husband Ed of Bolivar, MO, Marcia (Dunlap) Quigley and fiancée Matt Penner of Leon, KS, and Steven Dunlap of Bolivar, MO. Also surviving are one granddaughter and three grandsons, Signey (Kurtz) Akins and husband Mat of Grand Prairie, TX, Eli O’Sullivan Kurtz and wife Keely of Kansas City, Missouri, Alex Quigley and wife Amber of Hiram, GA, and Chase Kurtz and girlfriend Hana Roach of Springfield, MO; one brother, Earl Carlson of Elsmore, KS; many nieces and nephews; and two great-granddaughters that she loved dearly, Lorelei Quigley and Atley Akins. She was preceded in death by her parents, her husband, brothers Ernest and Edward, sisters Elsie, Esther, Evelyn, and Ellen. They no doubt have many raucous and sarcastic stories and feisty games of Pitch to catch up on now that they are together again. The funeral will be held at 2:00 pm on Monday, November 23rd at the Elsmore Methodist Church, Elsmore, Kansas. Countryside Funeral Home of Chanute has charge of arrangements for the funeral. The graveside service and burial will be in the Elsmore Cemetery following the funeral. In lieu of flowers, please send donations to Carrie J. Babb Cancer Center, 1501 NO Oakland, Bolivar, MO 65613, and Cancer Center of Kansas, 505 SO Plummer, Chanute, KS 66720. The family asks all in attendance to wear face masks and to social distance during the funeral and graveside service.

Elaine Carlson Dunlap traded her earthly tethers for wings of gold on the morning of November 19, 2020, age 81 in Bolivar, Missouri surrounded by friends and family. She accepted Christ as her Savior at a young age and quietly prayed for her... View Obituary & Service Information

The family of Elaine Carlson Dunlap created this Life Tributes page to make it easy to share your memories.

Elaine Carlson Dunlap traded her earthly tethers for wings of...

Send flowers to the Dunlap family.