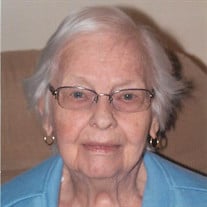 Erma Pauline “Polly” Cline, 95, passed away peacefully on August 13, 2019 at Morningstar Care Home. She was born on October 15, 1923 in Chanute, KS to Noah and Edith (Marten) Stuckey. She graduated from high school and Business College in Chanute, and went on to work at the State Bank in Fredonia for the better part of 50 years. Polly was one of the employees that were working at the bank when it was robbed in 1960. Mutual friends set her up on a blind date with Willard Vaughn Cline, and they were joined in matrimony on June 15, 1947. Vaughn and Polly were married for 65 years, until his death in 2013. They lived on a small farm outside Fredonia where they raised hogs, cattle, sheep, and kept many cats and dogs. Horseback riding, square dancing, sewing, reading, cooking and baking were among some of her favorite activities. She loved being around her many nieces and nephews and hearing about what was happening in their lives. Preceded in death by her parents, husband Willard Vaughn Cline, sisters-in-law Jewell (Cline) Sharp, Valetta (Cline) Templeman, niece Alice (Sharp) Eck, nephews Gary Sharp, Larry Queen, and David Hazels LTC (Ret.). She is survived by many friends and family including a nephew John Eck, nieces Gayle (Don) Keeton, and Jeanie Hazels. Great nieces and nephews, Carolyn Reale, Tena (Mike) Stultz, Mitch (Roya) Eck, Annette (Brent) Cranmer, Richard (Phara) Queen, Scott Queen, Sylvia (Rick) Thackray, Krista (Tommy) Fabregas, Kara Griffin, David (Beth) Hazels, Jr., Susan Hazels Mitmesser, Ann (Sven Davis) Hazels, Dana (Dan) Seith, 23 great-great nieces and nephews, and 8 great-great-great nieces and nephews. Memorials may be made to the Fredonia Public Library Memorial services Saturday, August 17, 2019 at 11am - Countryside Funeral Home in Fredonia. Inurnment will follow at the Fredonia City Cemetery. Online condolences may be left at: www.countrysidefh.com Services entrusted to: Countryside Funeral Home 420 S. 20th St., P.O. Box 247, Fredonia, KS 66736

The family of Erma "Polly" Pauline Cline created this Life Tributes page to make it easy to share your memories.

Send flowers to the Cline family.