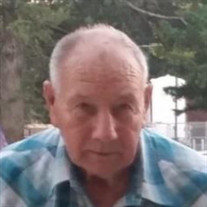 Ernest Eugene Persinger, age 86 formerly of Longton, KS, passed away Thursday, March 4, 2021 at Emporia Place in Emporia, KS. Ernest was born January 15, 1935 in rural Elk County to Earl and Millie (Chamberlain) Persinger. He was raised alongside 2 brothers and graduated from Longton High School. After high school, he enlisted in the United States Army and spent his time at Ft. Riley working on the Berlin Wall project. On January 31,1958, Ernest married Margaret Dyer in Longmont, CO. They raised 2 sons together, James and Jeff, and were married 44 years until her passing in 2002. Early in their marriage, they lived in Denver, CO while working for Martin-Marietta Company. In 1959, they moved back to Longton, KS, where they farmed and raised cattle, and co-owned Frontier Auction and Realty, and Persinger Sales and Service for more than 30 years. Ernest loved the auctioneer chant, and it was evident in his work. In 1979, he was awarded the Kansas Auctioneer of the Year Award, and was President of the Kansas Auctioneer Association in 1979. He spent several years auctioneering at South Coffeyville Stockyards on sale days, alongside running his own auctioneer service. Ernest is survived by his sons James Persinger (Jeanne Jolley) of Ogallala, NE Jeff (Glenda) Persinger of Donna, TX 5 Grandchildren Taylor Persinger of Kearney, NE Cody Persinger of Ogallala, NE Bret (Stacy) Persinger of Wichita, KS Travis (Amy) Persinger of Garnett, KS Nathan (David) Persinger of Donna, TX 6 Great-Grandchildren Bentley, Maddux, Easton, Seneca, Carter, Alexis Numerous nieces and nephews Sister-in-Law, Mary Lou Persinger of Emporia, KS He was preceded in death by his parents, wife, Margaret, and brothers, Richard and Bill Visitation will be at Countryside Funeral Home in Howard, KS on Wednesday, March 10, 2021 from 5:00 to 7:00 pm Funeral will be held on Thursday, March 11, 2021 at 10:30 am at the Longton United Methodist Church in Longton, KS Interment will follow in the Longton Cemetery Memorial contributions can be made to the Longton United Methodist Church and can be mailed to or left with the funeral home. Services entrusted to Countryside Funeral Home, 206 E. Washington, PO Box 1233, Howard, KS 67349

The family of Ernest Eugene Persinger created this Life Tributes page to make it easy to share your memories.

Send flowers to the Persinger family.