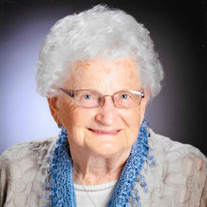 Ethel Marie Huser age 89 of Fredonia passed away on Saturday, August 24, 2019 at the Morningstar Living Center in Fredonia. Ethel was born on January 2, 1930 in Streator, IL the daughter of Alex and Alma (Saltz) Roth. When she was 5 they moved to Caldwell, KS. where her family farmed. Her senior year they moved to a farm outside of Independence which is now part of Elk City Lake. She graduated from Independence H.S. in 1947. After high school, Ethel married Herbert E. Huser on August 28, 1948 in Independence, KS. Ethel worked along with Herb raising their family and working on their farm. They raised nine children on the family farm, where they taught their children to work. Ethel and Herb were married for 61 years until his death of January 3, 2009. Ethel was a member of the Sacred Heart Catholic Church in Fredonia, she was also a member of the Altar Society. She enjoyed working in her garden raising flowers and vegetables, and canning. She was famous to her family for her dill pickles, homemade rolls, and fruit pies. She could out eat everyone when corn on the cob was in season. She enjoyed raising her family, and watching her grandchildren, and great grandchildren. God was very much a part of her life. Every night she was seen praying for those she loved. The rosary was a very special prayer to her. Survivors include: 9 Children: David Huser and wife Robin of Cherryvale, KS Dan Huser and wife Rita of Wichita, KS Steve Huser and wife Florence of Fredonia, KS Rosanna Shue and husband Jeff of Topeka, KS Geralyn Krause and husband Dave of Burlington, KS Mark Huser and wife Jeryl of Fredonia, KS Myra Smith and husband Kevin of Bentonville, AR Roger Huser and wife Ann of Fredonia, KS Kathy McVey and husband Larry of Fredonia, KS Sister: Mary Kay Lyman of San Clemente, CA 28 Grandchildren and 52 Great Grandchildren Ethel was preceded in death by her parents, husband Herbert, sister Norma Starling, brothers Don Roth, Roger Roth, Richard, Roth and Dale Roth and one grandson Camron Huser Mass of Christian Burial Rites will be held on Saturday, August 31, 2019 at 10:00 AM at the Sacred Heart Catholic Church in Fredonia, with burial to follow at the Sacred Heart Cemetery in Fredonia. Visitation will be held on Friday, August 30, 2019 from 4-6 PM at Countryside Funeral Home in Fredonia, Rosary will then be held at 7:30 PM at the Sacred Heart Catholic Church. Online condolences may be left at: www.countrysidefh.com Memorials have been suggested to: Dioceses of Wichita Seminary Fund, or the Sacred Heart Catholic Church in Fredonia or to St. Jude’s Children’s Hospital, and may be left with or mailed to the funeral home. Services entrusted to: Countryside Funeral Home 420 S. 20th St., P.O. Box 247, Fredonia, KS 66736

Ethel Marie Huser age 89 of Fredonia passed away on Saturday, August 24, 2019 at the Morningstar Living Center in Fredonia. Ethel was born on January 2, 1930 in Streator, IL the daughter of Alex and Alma (Saltz) Roth. When she was 5 they... View Obituary & Service Information

The family of Ethel Marie Huser created this Life Tributes page to make it easy to share your memories.

Ethel Marie Huser age 89 of Fredonia passed away on Saturday,...