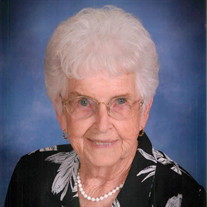 Flora E. Erickson, age 94, of Chanute passed away on Thursday December 10, 2020 at Neosho Memorial Regional Medical Center. Flora was born on July 15, 1926 in Petrolia, KS the daughter of Earl and Mae (Larson) Edmonson. Flora was a graduate of Oskaloosa High School class of 1944. On December 26, 1953 she married Kile K. Erickson. They were married 42 years. She and Kile lived in Chanute until Kile’s retirement from the Santa Fe railroad. During their years in Chanute they raised a family of 5 children. Flora made numerous life long friends during her years in Chanute. Flora worked as a legal secretary most of her life. She was an active member in the Chanute Chapter of Legal Secretaries until she and Kile moved to Northern California in 1978. While living there, she helped establish the Trinity County Chapter of Legal Secretaries. She made many life long friends during the 10 years that she and Kile lived there. The couple returned to Chanute in 1988 due to Kile’s declining health. She worked at the Chanute Chamber of Commerce for 6 years before her retirement in 1994. Flora was an active member of the First United Methodist Church, Chanute. She loved making people happy by baking their favorite sweet treats. She was also an active member of Chanute Friends of the Library serving as chair person for the annual Valentine’s Chocolate Sale fund raiser and the Chanute Senior Center serving as secretary for many years. In addition, she was a member of the American Legion Aux, VFW, NARVE. Flora liked to stay active and connected to people through organizations, community service, travel, playing cards and bingo, and going to casinos. Flora was preceded in death by her parents, husband Kile, son Robert, grand son Tommy, and great grand daughter Bo Kathryn Mae, siblings George, Marilyn, Ellen, Eddie, and Jobe. Flora is survived by children: Gloria Phillips (Don) of Chanute Rosemary Mitchell (Tom) of Thayer Cindy Finley (Mike) of Chanute Suzanne Woodard (Federico) of Chanute 12 Grandchildren, 25 Great Grandchildren, and 7 Great-great Grandchildren Cremation has been requested. Visitation will be held on Thursday, July 15, 2021 from 5-7pm at the FUMC and a memorial service will be held on Friday, July 16 2021 at the First United Methodist Church, in Chanute at 10:00 am, with inurnment to follow at the Village Creek Cemetery. All are invited to lunch in Fellowship Hall directly after the inurnment. Memorials have been suggested to KICS (Kids in Christ Service) and may be left with or mailed to the funeral home. Online condolences may be left at: www.countrysidefh.com Services entrusted to: Countryside Funeral Home 101 N. Highland, Chanute, KS 66720

The family of Flora E. Erickson created this Life Tributes page to make it easy to share your memories.

Flora E. Erickson, age 94, of Chanute passed away on Thursday...

Send flowers to the Erickson family.