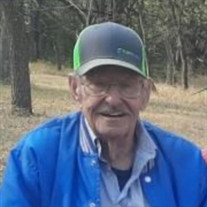 Floyd Henry “Nick” Nichols was born August 5, 1936, in Blackwater, Missouri, and passed away on Monday, December 7, 2020 at the age of 84 at home in Fall River, Kansas. Nick grew up in rural areas of Missouri, and although he only had a 9th grade education, he was full of knowledge and trivia on many subjects. He joined the Army on March 1, 1954 and in 1955, while in Detroit, MI, waiting to ship out to Germany, he met Esther Marie Berryman on a blind date. After 4 dates, they were married on December 5, 1955. After his service in the Army was complete, Nick and Esther settled in Wichita, Kansas. He worked at several jobs before working as a mechanic for many years. He was the owner of the Bug Shop in Wichita. Nick and Esther wanted away from the city, so they moved to the Lakeside area in 1979, and then to Fall River in 2001. They later moved to Eureka for Esther to be closer to medical care. After she went to live in the nursing home, Nick moved back to Fall River to his little apartment in 2016. When they moved to Lakeside, Nick gave up being a mechanic and began hauling rock, which he did for 30+ years. Nick knew every back road in several counties, and had a story about someone on each one of those roads. He had many, many friends and acquaintances. As most of his friends know, he painted rocks and signs, of which most were given away. He did this to stay busy and always had a story about what piece he was working on and who it would go to. One of his favorite stories was about a little boy who called him an artist. He ate that up and would remind us that he had soft hands now because they were the hands of an artist and he needed to protect them. He also knew every little hole in the wall café and restaurant in a 50-mile radius. When Carol asked him if he wanted to move to Texas to live with her, he said he couldn’t because he had weekly lunches with Mark, mostly for pan fried chicken, and that he couldn’t give those up. In his younger years he liked to hunt, play the guitar and was an accomplished pool player. He was quite stubborn and liked drinking beer. Nick loved his children, grandchildren, and even more so his great-grandchildren. He had a rough exterior with a very soft heart. When Esther became unable to care for herself, Nick was her caregiver. By then, he had begun to soften. Most mornings he would get up early and sit on the couch crying, remembering their youth, regrets of things he’d done and because he couldn’t fix her. The kids were in and out, buy mainly it was him taking care of her. He would pray and ask God for help. On one of those mornings with Carol there helping out, he was talking about when he would die and go to heaven so that he could see mom healthy again. That morning, May 18, 2013, after a long discussion, he was saved. He prayed the prayer of salvation with Carol and handed all his sin, all his regrets, and all his sorrow to God. We are confident he has gone home to Jesus and that all who are saved will see him again. Nick is survived by his children Mark Nichols and wife Connie of Eureka, KS Carol Smith and husband Wayne of Lone Star, TX Michelle Hollander and husband Norris of Wichita, KS Grandsons Chris and wife Kristi of Paola, KS Morgan and wife Tomi of Mirabile, MO Jason and wife Ashley of Eureka, KS 4 great-grandchildren, Tyler, Gage, Riley, Zoe, and one to arrive in January 2021 Many great friends He was preceded in death by his wife, Esther; parents, Roy and Bessie (Bates) Nichols; sister, Marilyn Higgins-Keen and her daughter, Vicki Lynn Shipman. Due to COVID considerations, the family will hold a private graveside service at Weakley Cemetery, New Albany, KS. Memorials are suggested to the Fall River Volunteer Fire Department, and can be mailed to or left with the funeral home. Services entrusted to: Countryside Funeral Home, 206 E. Washington, PO Box 1233, Howard, KS 67349

The family of Floyd Henry "Nick" Nichols created this Life Tributes page to make it easy to share your memories.

Send flowers to the Nichols family.