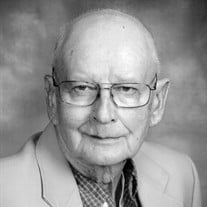 Fred J. Lassman, Jr passed away peacefully with his family at his bedside at Oklahoma Heart Hospital in Oklahoma City, Oklahoma on Friday, February 21, 2020. He was 85 years old. Fred was born near Savonburg, Kansas to Fred Lassman, Sr and Mary Pearl Baker Lassman, on June 10, 1934, the youngest of 11 children. He helped on the farm outside of Humboldt while attending country schools. He graduated from Humboldt High School in 1952. He served in the US Navy Reserves for 28 years, with 4 of those years as active duty at Olathe Air Base. He married Janet Saving on August 15, 1954. After active duty, Fred & Janet moved back to Humboldt where they raised their three children. Janet died in 1987 after 32 years of marriage. He was married for 16 years to Anita Arnold until her death. Fred worked as an electrician for his brother, Alvin, and later started his own business, Lassman Electric. He was a member of the Humboldt School Board for many years. He was a lifelong member of St. Peter’s Lutheran Church. He enjoyed golfing with friends and breakfast with the guys at H & H Diner. He lived in Humboldt until moving to Stillwater, OK, in December of 2017. He attended Salem Lutheran Church while in Stillwater, but remained a member of St. Peters in Humboldt. He was preceded in death by his parents; his wives Janet and Anita; his brothers Clarence, Ernest, Alvin, Clyde, Ralph, Robert, Lloyd, and Lonnie; his sisters Helen and Betty; their spouses Wilma, Doraine, Ladine, Virginia, Frances, Margaret, Carl, and Arnie. Fred is survived by daughter Cindy Pennie & husband Dana of Stillwater, OK, daughter Jeanne Lassman of Quinter, KS, and son John Lassman and wife Brenda of Overland Park, KS; six grandchildren, Joel Pennie, Amanda Harkness, Aaron Pennie, David Lassman, LaVonne Inloes, and Daniel Inloes; two great-grandchildren Spencer and Miley LaRue. He is also survived by sisters-in-law Elizabeth Welch, Carolyn Lassman, Ann Payne, and Ellie Saving. The service is scheduled for Saturday, February 29, 2020, at 2:00 PM at St. Peters Lutheran Church in Humboldt, Pastor Timothy Roth and Pastor David Hutson officiating. Visitation will be 6:00 to 8:00 PM Friday, February 28 at Countryside Funeral Home in Humboldt, KS and 12:00 to 1:30 PM Saturday at St. Peters Lutheran Church in Humboldt. Burial will follow at Mt. Hope Cemetery and Chanute Honor Guard will be in charge of military honors. A light meal will follow in the Fellowship Hall at St. Peters. Memorials can be made to St. Peters Lutheran Church in Humboldt, KS, or Salem Lutheran Church in Stillwater, OK and may be left with or mailed to the funeral home. Services have been entrusted to Countryside Funeral Home 908 Central, Humboldt, KS 66748.

Fred J. Lassman, Jr passed away peacefully with his family at his bedside at Oklahoma Heart Hospital in Oklahoma City, Oklahoma on Friday, February 21, 2020. He was 85 years old. Fred was born near Savonburg, Kansas to Fred Lassman, Sr and... View Obituary & Service Information

The family of Fred J. Lassman Jr. created this Life Tributes page to make it easy to share your memories.

Fred J. Lassman, Jr passed away peacefully with his family at...

Send flowers to the Lassman family.