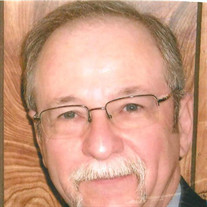 Frederick Michael McCreedy, 72, of Chanute passed away Thursday, June 10, 2021 at his home, after an eight year battle with Cancer. Mike was born on September 25, 1948 in Chanute, KS the son of Frederick Lee and Jean Marie (Smith) McCreedy. Mike was a graduate of Chanute High School class of 1966, he then attended Neosho Community College and received an Associates Degree then to PSU where he received his bachelor's degree in History in 1970, later in life he received his Masters degree in History in 1998. Mike was initiated into the Honor Society of Phi Kappa Phi at Pittsburg State University in 1996. He also received his Certified Purchasing Manager certification from UMKC in 1985 and Lifetime membership in 1999. Mike was the Purchasing Manager for Kustom Signals, Inc. and retired in 2015 after serving 44 years with the company. On September 25, 1981 at Snyder Chapel on NCCC campus Mike married Nancy Irene Parker, and she survives at their home. Mike was a huge lover of music. He and Nancy attended many concerts and loved to spend time through the years in the '56 Chevy or their Camaro listening to tunes or just rocking out at home. Love, music and laughter were main ingredients for their happy life together. Mike was an avid fan of the Kansas City Royals, Chiefs and PSU Gorillas. Including his wife Nancy, Mike is survived by: Children: Donald (Don) McCreedy of Topeka, KS Michael (Mike) McCreedy of Kansas City, MO. Granddaughter Abbigale McCreedy of Topeka, KS Sister: Jan Brooksher (Harold) of Chanute, KS Sister-in-laws: Donna King of Edmond, OK Cynthia Daniels (Mark) of Greenbrier, AR Brother-in-law Tim Kisner of Okmulgee, OK Uncle Kenny McCreedy (Wanda) of Goodyear, AZ Numerous nieces and nephews: Funeral services will be held Thursday, June 17, 2021 at 11:00 am at the funeral home, with burial to follow at Memorial Park Cemetery in Chanute. There will be no visitation. At the request of the family, please dress casual. Memorials have been suggested to the Pittsburg State University Department of History and may be left with or mailed to the funeral home. Online condolences may be left at www.countrysidefh.com Services entrusted to Countryside Funeral Home 101 N. Highland, Chanute, KS 66720

Frederick Michael McCreedy, 72, of Chanute passed away Thursday, June 10, 2021 at his home, after an eight year battle with Cancer. Mike was born on September 25, 1948 in Chanute, KS the son of Frederick Lee and Jean Marie (Smith) McCreedy. Mike... View Obituary & Service Information

The family of Frederick Michael McCreedy created this Life Tributes page to make it easy to share your memories.

Send flowers to the McCreedy family.