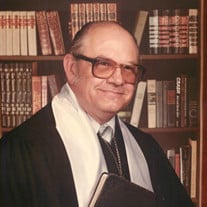 Pastor Gary C. Parsons passed away on August 18, 2020 in Greenwood County Hospital, Eureka Ks, after a long illness at the age of 85. Gary was born on April 20th, 1935 at Seaside Hospital in Crescent City, California to his parents Henry and... View Obituary & Service Information

The family of Pastor Gary C. Parsons created this Life Tributes page to make it easy to share your memories.

Send flowers to the Parsons family.