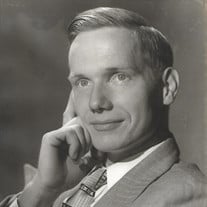 Gene Francis Johnson, 92, entered into rest with his Lord and Savior at 4:20 a.m. on June 11, 2019 in Chanute, Kansas. He was born on March 7, 1927, in Belleville, KS, the youngest child of Charles Floyd Johnson, Sr., and Donna Pearl (Howell) Johnson. On June 28, 1953, Gene married Donna Jean Smith, in Topeka, KS, to this union, four children were born. On April 10, 1945, Gene enlisted in the U. S. Army Air Corps and had duty postings in The Philippines, Japan, and Adak, Alaska. After the war, he also participated in the Berlin Air Lift. A glazier by trade, Gene worked for Harding Glass in Topeka, KS and Jayhawk Glass in Chanute. For 25 years, Gene was the main announcer for Parks and Recreation Softball, first at the old Highland Park Diamond doing Industrial League and Church League Fast-Pitch softball, and then moving to the Santa Fe Diamond complex where he announced Slo-Pitch softball for 20 years, teaching all four sons announcing, statistics, and record keeping. Gene was initiated into the Masonic Order in June of 1950, and in his 69 years of service to the Masons he held every station in Masonry numerous times, including Master of Cedar Lodge #103 A.F. & A.M., in Chanute, twice. Gene is survived by wife, Donna, of the home; sons, Michael of Owasso, OK, Gary (Clarice) of Gardner, KS, Randall of Leavenworth, KS, and Robert, of the home; two grandchildren; three great-grandsons and one great-granddaughter. He was preceded in death by his parents, all his siblings, and one granddaughter. Funeral service will be on Saturday, June 15, 2019 at 10 a.m. at the First Baptist Church in Chanute, KS. The Legion Riders and Chanute Honor Guard will be in charge of military honors. Online condolences may be left at: www.countrysidefh.com. The family suggests memorials to be made to the First Baptist Church Deacon Scholarship Fund or to the FireEscape Coffeehouse and may be left with or mailed to the funeral home. Arrangements have been entrusted to Countryside Funeral Home, 101 N. Highland, Chanute, KS 66720.

The family of Gene Francis Johnson created this Life Tributes page to make it easy to share your memories.

Gene Francis Johnson, 92, entered into rest with his Lord and...