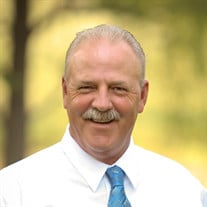 Albert Eugene “Gene” Slinkard, Jr., age 63 of Moline, KS, was called to his heavenly home on Friday, February 11, 2022, with his wife and children by his side at OSU Medical Center in Tulsa, OK. Gene was born March 29, 1958 to Albert Eugene Sr. and Lillie Fern (Parsons) Slinkard in El Dorado, KS. The family resided in rural Kansas, where Gene spent a good part of his life. After the death of Albert Sr. when Gene was 3, Lillie married Raymond Leroy Ivie who raised Gene and his sisters as his own. In August 1980, he met the love of his life Cindy. They were married on December 8th in a small ceremony a few years later and had their family of five by 1985 with Shaunda, Joshua, and Stefanie. Gene was a hard worker all of his life and was employed by Diamond Engineering in Wichita - & resided in the area for many years - and then CenCon out of Lebanon, KS before settling his family in Howard, KS, where his children attended and graduated at West Elk High School. He owned and operated ACES Underground in Elk County for 12 years, and was currently working for the Elk County Road Department. When he wasn’t working, Gene could be found boating or playing with slot cars with his kids when they were younger, or hunting and fishing with them as they got older. He was a gun enthusiast, and loved tinkering with RC helicopters and drones. He was also always readily available to help his family and friends anytime they called. Gene will be missed greatly by all who knew him and remembered by his family as the strongest and most courageous man they ever knew. In the end, it wasn’t that the fight was greater than he, but that Gene was too great for this world and was called up to the place prepared for him in Heaven. He is survived by his wife, Cindy Children: Shaunda Holden of Haysville, KS; Joshua (Crystal) Slinkard of Augusta, KS; Stefanie (Roger) Bieberle of Derby, KS 7 Grandchildren: Tyler, Christopher, Lauren, Tyler, Steven, Sydney, Ashlin; 1 Great-Grandson: Axel His best fur buddy, Wilson Sisters: Debbie, Dianna, Sharon, and Melissa (Carl); In-Laws: Betty, Tammy (Paul), Georgia (Kevin), and Bill; plus numerous nieces, nephews, and great-nieces/nephews He was preceded in death by his parents, step-father, father-in-law, and eldest nephew. Funeral Service will be held at 12:00 PM on Saturday, February 19, 2022 at Countryside Funeral Home in Howard, KS. Family will receive friends at visitation from 10:00 AM until service time. Memorial contributions, recommended by Flyin’ 3 Vet Clinic can be made to the Chautauqua County Animal Shelter in honor of Wilson, and can be mailed to or left with the funeral home. Services entrusted to Countryside Funeral Home, 206 E. Washington, PO Box 1233, Howard, KS 67349

The family of Gene Slinkard created this Life Tributes page to make it easy to share your memories.

Send flowers to the Slinkard family.