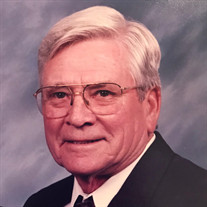 George “Wayne” Beech, 89, passed away on Friday, July 12, 2019 in Chanute, KS surrounded by loved ones in his home. Wayne was born on October 14, 1929 on the farm outside of Walnut, KS , the son of George and Ruth (Smith) Beech. Wayne was united in marriage on December 23, 1952 in Stark, KS to Gloria Elder. He entered into the United State Navy and proudly served 3 years. Wayne and Gloria made their home in Chanute, KS in 1955 and started Chanute LP Gas. Wayne spent several years building up his propane business and although he retired in 1993, he remained active in the Kansas LP Gas Association. Before Alzheimer’s took many of his joys, Wayne took great pleasure in golfing, being a ‘Snowbird’ with his wife in the winters, farming and raising cattle and spending time with his family. Wayne was a die-hard K-State fan and loved to taunt the Chicken Hawk Fans. Wayne is survived by: Daughters: Teresa Osborn and husband Junior of Spring Hill, KS Brenda Jackson of Kansas City, MO 4 Granddaughters: Cortney Ledezma and husband Alberto of Rosarito, Mexico Lindsey Hayward of Blaine, WA Andrea Glover and husband Brett of Merriam, KS Allie Contreras and husband Luis of Merriam, KS 5 Great Grandchildren: Olivia, Alaina, Isabella, Elliana and Ezra Ledezma of Rosarito, Mexico Beloved Caretakers: Shawnda Edwards and Brad Hermreck of Chanute, KS He was preceded in death by his parents; wife, Gloria and brothers, Paul and Max Beech. Special thanks to Kindred Hospice for the amazing care they provided to Wayne throughout the past year. The family will greet friends on Thursday, July 18, 2019 from 6-8 p.m. at Countryside Funeral Home Gibson Chapel at 16 N. Forest in Chanute, KS. A funeral service will be held on Friday, July 19, 2019 at 10:30 a.m. at Countryside Funeral Home Gibson Chapel. Interment will follow at Mt. Morriah Cemetery south of Savonburg, KS. Online condolences may be left at: www.countrysidefh.com. The family suggests memorials to be made to Alzheimer’s Association and may be mailed to the funeral home. Arrangements have been entrusted to Countryside Funeral Home, 16 N. Forest, Chanute, KS 66720.

The family of George "Wayne" Beech created this Life Tributes page to make it easy to share your memories.

Send flowers to the Beech family.