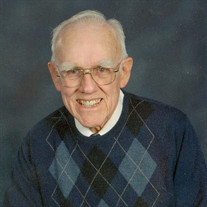 Glenn Wamon Shockey, age 93 of Chanute, KS, passed away on Friday, August 9, 2019 at Country Place Senior Living in Chanute, KS. He was born on February 13, 1926 in Delray Beach, FL, the son of Andrew and Ida (Hardin) Shockey. He married Margaret Speiser on January 9, 1948 in Chanute, KS Glenn served in the United State Army Infantry in the European Theater from May 23, 1944 to June 9, 1946. He worked as a switchman for Southwestern Bell for many years. Glenn enjoyed camping and woodworking. Margaret and he were instrumental in helping open Cherry Street Youth Center. He was always willing to help out those in need and he had such a big heart for others. Glenn was dedicated to his church and was a family man. He was a member of the Bell Telephone Pioneers, First Baptist Church and also served as a deacon at the church. Glenn is survived by: Sons: Fred Shockey and wife Alice of Carrollton, TX John Shockey and wife Cindy of Chanute, KS Daughter: Marci Krause of Thornton, CO 8 Grandchildren 15 Great Grandchildren Glenn was preceded in death by his parents, wife, Margaret; infant daughter, Joyce Shockey and sisters Edith and Grace. Cremation has been requested. The family will be holding a celebration of life service on Saturday, November 9, 2019 at 10 a.m. at the First Baptist Church in Chanute, KS. He will be laid to rest at Neosho County Memorial Park Cemetery in Chanute. Online condolences may be left at: www.countrysidefh.com. The family suggests memorials to be made to Horizon Hospice 1709 W. 7th St., Chanute, KS 66720 or Rehab Fitness Center Annual Turkey Trot 2231 W. Main, Chanute, KS 66720 Arrangements have been entrusted to Countryside Funeral Home, 101 N. Highland, Chanute, KS 66720.

The family of Glenn Wamon Shockey created this Life Tributes page to make it easy to share your memories.

Send flowers to the Shockey family.