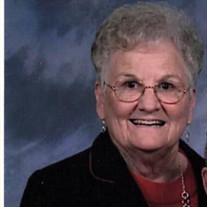 Gloria &#8220; Lavon&#8221; Heilman was born October 16, 1932 at Stark, Kansas. She passed away peacefully on March 24, 2022 at Neosho Memorial Regional Medical Center. She was the daughter of Glenn and Edna Chard Michael and graduated from... View Obituary & Service Information

The family of Gloria Lavon Heilman created this Life Tributes page to make it easy to share your memories.

Send flowers to the Heilman family.