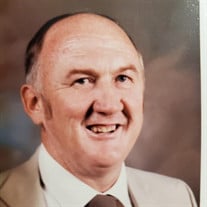 Using his size sixteen shoes and an even bigger heart, Harold Everett Barnhart leapt into heaven on February 29, 2020 to meet Jesus and say hello to all who went before him. Be patient up there. He will want to greet each of you personally and spend time catching up. He never left a venue (restaurant, store, church, ball diamond, basketball bleachers) without sharing his love and joy with everyone. Harold was born May 6, 1942, in Thayer, Kansas to Everett Paul and MaryEtta (Crowl) Barnhart. He graduated from Chanute High School in 1960. Attended Neosho County Community College and then continued his education at Pittsburg State University where he began studying accounting. During his senior year, Harold decided he wanted to work with kids and not sit behind a desk. With help from his advisor, he switched his major to become a teacher. While at PSU, he met his beautiful bride-to-be. He graduated with a bachelor’s degree in Elementary Education in 1965. He married Betty Jane McDaniel on April 9, 1966. He continued his education while working and earned a Master’s Degree in Administration in 1969. “To teach is to touch a life forever.” Mr. Barnhart had the opportunity to touch many lives. His impact can’t be measured. Harold began his teaching career at Murray Hill Elementary School in Chanute, Kansas in the fall of 1965. He married the love of his life, Betty the following spring. He became a teacher and principal in 1968. The following year he moved to become principal at Alcott Elementary School where he led teachers and students until 1982 before moving to Hutton Elementary. Mr. Barnhart retired from USD 413 in 1997. He never retired from teaching and impacting others. Whether he was your teacher, principal, baseball coach, youth pastor, Sunday school teacher, Boy Scout leader, fishing buddy, or friend, he gave you grace to grow, cheered you through highs and lows, and prayed for you daily. Mr. Barnhart was a man of faith and family was his top priority. On the living room wall in his home hangs a sign that says, “A fisherman and the love of his life lives here.” Harold will be missed by: his wife Betty (of the home), children Brian and Jenny Barnhart (Lenexa, KS), Steve and Tammy Fellers (El Dorado, KS), his grandchildren Ally Barnhart (Tampa, FL), Nate Barnhart (Lenexa, KS), Heath Fellers (Austin, TX), and Hayley and Samuel McVay III (El Dorado, KS), his great-grandchildren Ellis, Emery, and Eden, brother Glenn Barnhart (Chanute, KS), sister Lois (Robert) Babcock (Chanute, KS), nieces, nephews, and cousins. Mr. Barnhart is reunited with his son Steve Harold, his mom and dad, and many others. The family will greet friends and family on Wednesday, March 4, 2020 from 6-8 p.m. at Countryside Funeral Home 101 N. Highland, Chanute, KS 66720. Funeral services will be held on Thursday, March 5, 2020 at 10 a.m. at New Life United Brethren Church in Chanute, KS. Burial will follow in Neosho County Memorial Park Cemetery in Chanute. Online condolences may be left at: www.countrysidefh.com. The family suggests memorials to be made to the New Life United Brethren Church and may be left with or mailed to the funeral home. Arrangements have been entrusted to Countryside Funeral Home, 101 N. Highland, Chanute, KS 66720.

Using his size sixteen shoes and an even bigger heart, Harold Everett Barnhart leapt into heaven on February 29, 2020 to meet Jesus and say hello to all who went before him. Be patient up there. He will want to greet each of you personally and... View Obituary & Service Information

The family of Harold Everett Barnhart created this Life Tributes page to make it easy to share your memories.

Using his size sixteen shoes and an even bigger heart, Harold...

Send flowers to the Barnhart family.