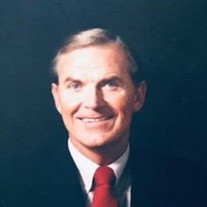 Harvey John Mitchell, age 87 passed away peacefully at his home in Longton, KS, on Friday, November 5, 2021. Born April 9, 1934, Harvey was adopted by Zubizoe and Russell Mitchell of Tempe, Arizona. He graduated from Jordan High School in Long Beach, CA and went on to attend Community College, and The American Banker College from where he graduated. Harvey was first employed by the U.S. Treasury Department as a Bank Auditor. He transitioned to private Bank Auditor in downtown Los Angeles, and later became Vice-President of Golden State Bank. In 1973 he moved to Escondido, California to become President and CEO of Escondido National Bank. He helped many residents start new businesses and funded larger residential and commercial building companies in Escondido. He served on the Federal Reserve Bank of San Francisco, Los Angeles branch for 6 years, and was on the building committee for the New Federal Reserve building completed in 1985. Harvey was a community leader, and was President of the Palomar Hospital Foundation, the Presidents Club of Palomar College, the regional and local Boys and Girls Organization, the YMCA, the Community Bankers of California, Ridge Ranch Home Owners Association, and Escondido Charter High School Foundation Board. He served as a board member of the local Hospice, and the Escondido Community Clinic fund raising committee. He held various positions in the Downtown Escondido Rotary club through his years there and served as a 4-H leader. Harvey was a founding member of the Escondido Community Foundation and was on the Department of Transportation local committee to build Highway 15 through Escondido. He assisted in the negotiations to build a new shopping center in Escondido, “North County Fair.” In 1985, he collaborated with the local high school to develop the MAP program, M –(Maintain a rigorous course of study, with at least a 3.0 GPA), A –( Attend school daily), P –( Participate in school and/or community activities, with a minimum of one hundred hours). Students who achieve this in 4 years will have guaranteed college admission to California State University, in San Marcos. As CEO of the Escondido Chamber of Commerce from 2003 to 2012, he built a new Escondido Chamber of Commerce building raising $400,000 with members and businesses, he developed and published the Escondido magazine. Harvey organized ongoing bi-annual street fairs and “mixers” throughout the year. Harvey has received numerous proclamations and recognitions from State Representatives, Senators, and Mayors, and even had a Harvey Mitchell Day in Escondido. Harvey had a strong belief in Jesus Christ as his personal savior. He was a member of the Emmanuel Faith Community Church in Escondido, CA, and attended the Christian Community Church in Longton, KS and the Longton United Methodist Church. Harvey is survived by his wife, Cathy Half-sister Bobbie Moehn Daughters Kathie Weaver and husband Rick, Lauren McCoy and husband Drew, and Morgan Wasem Sons, David Mitchell, and Michael Mitchell Grandchildren, Brittney McAlexander, Brett Weaver, Molly McCoy, Greg McCoy, and Russell Wasem Great-grandson, Benjamin McAlexander Graveside services will be held at the Longton Cemetery in Longton, KS at 10:00 AM on Saturday, December 4, 2021 In lieu of flowers, memorial contributions are suggested to the Elk County Community Foundation Longton Impact Fund, Longton Historical Society, Emmanuel Faith Community Church, Escondido, Ca., Longton United Methodist Church, or the Christian Community Church, Longton and can be mailed to or left with the funeral home. Services entrusted to Countryside Funeral Home, 206 E. Washington, PO Box 1233, Howard, KS 67349

Harvey John Mitchell, age 87 passed away peacefully at his home in Longton, KS, on Friday, November 5, 2021. Born April 9, 1934, Harvey was adopted by Zubizoe and Russell Mitchell of Tempe, Arizona. He graduated from Jordan High School in... View Obituary & Service Information

The family of Harvey John Mitchell created this Life Tributes page to make it easy to share your memories.

Harvey John Mitchell, age 87 passed away peacefully at his home...

Send flowers to the Mitchell family.