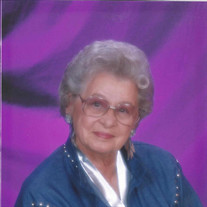 Hazel Lavelle Blair passed away on January 17th, 2022 after living her last nine years in Overland Park, KS near her son and family. She was just short of turning 100, which would have been on February 3rd. She was born in the country in Allen County, KS on February 3, 1922. She was the middle child of seven born to Harry and Grace (McCullough) Ingels. She had a very loving family that provided her with wonderful memories that lasted her a lifetime. Her family was everything to her. She never stopped talking about them, even in her last days. The family moved a lot while she was very young, but eventually settled back on the family farm east of the town of Leanna, KS. Her best times were spent participating in activities at Humboldt High School, from which she graduated in 1941. After graduation she attended Iola Junior College for two years. With the war effort commencing she went to live in Wichita with her sister Helen. They both contributed to the country by working at Boeing Aircraft in the engineering department. It is there that she met her future husband, James W. Blair. Together they had only one child, James L. Blair. While living in Wichita, Hazel attended night school at WSU and was a member of Beta Sigma Phi. She worked for several years at Henry's Clothing Store. They remained living in Wichita before retiring to Chanute, Kansas in 1983. Hazel had many relatives and friends in Chanute. She loved going to town and having coffee with the ladies! Chatting was one of Hazel's favorite activities. Her nature was extremely sociable. Hazel was the last child to survive of all her siblings. As they passed, she missed them deeply, as they were always a big part of her life. Her own husband passed in April of 2007. Hazel leaves her one son often referred to as JL, and his wife Julie. She also leaves five grandchildren - Michael, Jennifer, Brian, Megan, and Christine. Hazel was blessed to have nine great grandchildren -Zach and Oliver Hanson, Liam and Charlie Murphy, Camden Murphy and Ashton and Adeline Qualkinbush, and the littlest ones TJ and Desi Boyd. She also leaves numerous nieces and nephews. Hazel's vivacious, loving and caring personality will be remembered and treasured by all who knew her! Visitation will be on Friday, January 21, 2022 from 11:00 am to 12:00 pm at the funeral home with service to follow at 12:00 pm. There will be a luncheon after the service with the family announcing the location at the funeral home. Burial will occur at approximately 2:30 pm at Leanna Cemetery in rural Neosho County. Memorials have been suggested to the First United Methodist Church or Cherry Street Youth Center and may be left with or mailed to the funeral home. Online condolences may be left at: www.countrysidefh.com. Services entrusted to Countryside Funeral Home 101 N. Highland, Chanute, KS 66720.

Hazel Lavelle Blair passed away on January 17th, 2022 after living her last nine years in Overland Park, KS near her son and family. She was just short of turning 100, which would have been on February 3rd. She was born in the country... View Obituary & Service Information

The family of Hazel Lavelle Blair created this Life Tributes page to make it easy to share your memories.

Hazel Lavelle Blair passed away on January 17th, 2022 after living...

Send flowers to the Blair family.