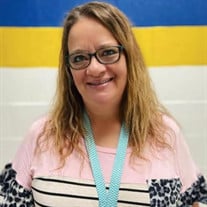 Helen Marie Friederich, 58, of Chanute passed away Saturday, April 23, 2022. Her death was unexpected. Helen Marie Maksimowicz was born on Nov. 6, 1963, to Edward and Josephine Maksimowicz in Chanute. She grew up in Chanute and graduated from Chanute High School in 1982. She was a cheerleader at Neosho County Community College. She received an associate’s degree while attending. She graduated from Pittsburg State University with a bachelor’s degree in elementary education in 2006. Helen was a devoted educator. She loved her students and teaching was her passion. She taught at elementary schools in Chanute, Fredonia, Neodesha and Altoona. Helen fulfilled her lifelong dream of taking her students to the Titanic Museum in Branson, Missouri, on her final day on Earth. On June 6, 2021, Helen married Gary Friederich on the deck they built at their home. Helen loved the Titanic, the Kansas City Chiefs, crafting and hunting. Survivors include her husband, Gary Friederich of the home; sons, Garrett Phillips of Albuquerque, New Mexico, Aaron Phillips and his wife, Hailey, of Parsons, and Dylan Phillips and his wife, Nora, of Iola; a stepson, Elijah Friederich of Pittsburg; a stepdaughter, Chloe Etz and her husband, Bradley, of Lawrence; a granddaughter, Zora, of Iola; brothers, Eddie Maksimowicz and his wife, Marianne, of Colorado Springs, Colorado, Sam Maksimowicz and his wife, Beverly, of Aurora, Colorado, and John Maksimowicz and his wife, Sheila, of Derby; a sister, Frances Friederich of Fayetteville, Arkansas; many cousins; nieces; nephews; students and friends. Visitation will be held on Thursday, April 28, 2022 from 5:30 pm to 7:30 pm at Countryside Funeral Home in Chanute. The service will be held on Friday, April 29, 2022 at 1:00 pm at the Good News Center in Chanute with burial to immediately follow at St. Patrick’s Catholic Cemetery in Chanute. Memorials have been suggested to the American Cancer Society via Relay for Life of Neosho County and may be left with or mailed to the funeral home. Online condolences may be left at: www.countrysidefh.com. Services entrusted to Countryside Funeral Home 101 N. Highland, Chanute, KS 66720.

Helen Marie Friederich, 58, of Chanute passed away Saturday, April 23, 2022. Her death was unexpected. Helen Marie Maksimowicz was born on Nov. 6, 1963, to Edward and Josephine Maksimowicz in Chanute. She grew up in Chanute and graduated from... View Obituary & Service Information

The family of Helen Marie Friederich created this Life Tributes page to make it easy to share your memories.

Send flowers to the Friederich family.