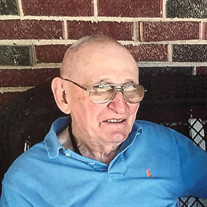 Henry Burton “Bud” Beechner, age 91 of Moline, Kansas passed away March 18, 2020 at Kansas Medical Center in Andover, Kansas Bud was born on July 24, 1928 to Henry P. Beechner Jr. and Margaret J. McClintock in Moline, Kansas. He attended elementary school in Butler, Missouri until the family returned to Moline. His education was continued at Moline Elementary and graduated from Moline High School with the class of 1946. He was a proud member of the Moline High School Alumni Association. He enlisted in the U.S. Navy in 1948. He served on various ships, overseas stations, as well as stations in the continental United States. He retired from the Navy after reaching the rank of Chief Petty Officer. On October 3, 1951 he was united in marriage Norma Jean Conner in Bentonville, Arkansas. They were married for 45 years until her death in April 1996. On April 24, 2994 he was united in marriage to Judy M. Clark in Howard, Kansas. They were married for 3 years until her death in March 2008. Bud is survived by: Son, Rick (Sally) Beechner of Moline, Kansas Stepson, Tom (Jana) Riddle of Roeland Park, Kansas Sister, Mary Boring of St. Joseph, Missouri 5 grandchildren, 5 great-grandchildren A bevy of nieces and nephews He was preceded in death by his parents and a sister, Beth Sinsel Graveside service will be held on Friday, March 27, 2020 at 11:00 am at the Moline City Cemetery, Moline, KS Memorial contributions can be made to the United Methodist Church of Moline and can be mailed to or left with the funeral home. Services entrusted to Countryside Funeral Home 206 E. Washington, P.O. Box 1233, Howard, KS 67349

The family of Henry "Bud" Beechner created this Life Tributes page to make it easy to share your memories.

Send flowers to the Beechner family.