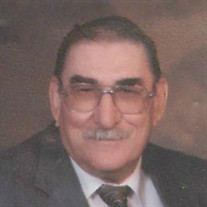 Homer “Leroy” West, age 91 of Neodesha, Kansas, passed away January 7, 2021 at Wilson Medical Clinic in Neodesha, Kansas. Leroy was born August 23, 1929 in Mulberry, Kansas to Homer and Orpha (Cox) West. He grew alongside 6 siblings, graduating from Mulberry High School. In October 1946, he enlisted in the United States Army, and served 2 years. While on one of his visits home, he met a young lady who happen to live next door. She had been wanting to meet him, as she had always heard his parents talk about their son that was in the military. They went out for a bowl of chili, and that’s all it took. On August 27, 1950 Leroy married that young lady, Dorothy Hopper in Mulberry, KS. They spent the next 70 wonderful years together, raising their 4 children. During their early years of marriage, they moved around to several places for work, and in 1970 made their home in Neodesha, KS. Leroy went to work for Cobalt Boats, retiring from there after 29 years. He was a member of the United Methodist Church, enjoyed camping, hunting, fishing, and carving. He was active as a Boy Scouts leader, Little League Ball coach, MYF leader, and a Sunday school superintendent. Leroy is survived by his wife, Dorothy West Children: Raymond (Gloria) West of Carthage, MO James (Joyce) West of Neodesha, KS Janet (John) Eggars of Neodesha, KS Debora West of Conifer, CO 8 grandchildren, 16 great-grandchildren, and 3 great-great grandchildren Former exchange student who came to the US in 1990 from Denmark, Nic Birch and wife, 4 children, and 3 step children Sister, Erma McClure of Columbus, KS He was preceded in death by his parents, and siblings, Lloyd West, Marvin West, Mervin West, Belva Galloway, and Ida Douglas Per Leroy’s request, cremation has been requested. Graveside memorial service will be held on Saturday, March 27, 2021 at 11:00 AM at Rosebank Cemetery, Mulberry, KS Following graveside services there will be a Celebration of Life service at 1:00 PM at the Senior Center in Mulberry, KS Memorial contributions can be made to the American Heart Association and can be mailed to or left with the funeral home. Services have been entrusted to: Countryside Funeral Home, 420 S. 20th, PO Box 247, Fredonia, KS 66736

The family of Homer "Leroy" West created this Life Tributes page to make it easy to share your memories.

Send flowers to the West family.