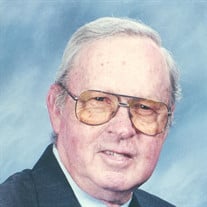 Howard Edwin Russell passed away Friday, September 20, 2019, at Neosho Memorial Regional Medical Center. Howard was born on July 1, 1929, to parents Grover and Janet Elsie (Cation) Russell. The youngest of three children, Howard was born, raised, and lived in rural Humboldt, for all of his 90 years of life. Howard graduated from Humboldt High School in 1948, and spent several years in the National Guard and Naval Air Reserve. In July of 1956, he married Eleanor Faye Riley, after which the two went on to raise two children; David Russell of Chanute, and Susan Ellis of Humboldt. Howard worked in Petrolia at City Service for several years, but spent a majority of his lifetime as a farmer and a father. He is preceded in death by sisters, Fern Carter and Eva Richardson; brothers-in-law, Nick Carter and V. B. Richardson; niece, Betty (Richardson) Smith; nephews, Richard (Dick) Smith and Kenneth Pittman; grand-nephew, John Richardson; and parents Grover and Elsie Russell. Howard is survived by his son, David Russell; son-in-law and daughter, Patrick and Susan Ellis; grandson, Riley Ellis; niece, Barbara (Richardson) Pittman; nephew, Jack Richardson; and many great-grand nephews and nieces. Family will greet friends and family on Friday, September 27, 2019 from 1:00 – 2:00 pm. at the Humboldt United Methodist Church in Humboldt, KS. Funeral service will be follow at 2 p.m. at the church. Burial will be at Leanna Cemetery east of Chanute. Online condolences may be left at: www.countrysidefh.com. The family suggests memorials to be made to Humboldt United Methodist Church, ACARF or Ann’s Angels and may be left with or mailed to the funeral home. Arrangements have been entrusted to Countryside Funeral Home, 101 N. Highland, Chanute, KS 66720.

The family of Howard Edwin Russell created this Life Tributes page to make it easy to share your memories.

Send flowers to the Russell family.