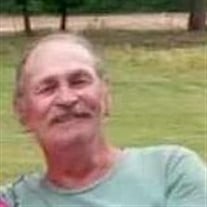 IJ Bittle, a resident of Altoona, KS died Tuesday, August 31, 2021 at Wilson Medical Center in Neodesha, KS. He was born July 2, 1946 in Danville, Arkansas to AG and Mazzel (Haywood) Bittle. IJ was raised in Rover, Arkansas but later came to Southeast Kansas where he met and on February 23, 1993 married his wife Gayle, combining their families to form their own “Brady Bunch”. IJ always had a sense of humor and wanted nothing more than to enjoy life. Family bonfires and barbecues out at the farm always created wonderful memories. He had many projects from tinkering in his woodshop on birdhouses and small things helping a neighbor any time they needed to full carpentry jobs. His most important job, however, was when he had to go to town and “drive Miss Daisy” taking Gayle on any errand she may have needed. Along with his wife Gayle, IJ is survived by: Brothers Bobby (Dean) Bittle of Dover, Arkansas and Jack (Sue) Bittle of Darnell, Arkansas. Children Gloria Emmons and her husband Neal Lawrence of Altoona, KS, Lisa Owens and Jason Owens both of Darnell, Arkansas. Grandchildren Rick Graham, RJ Snovelle, Vivian Marie Hasler, Melissa Lawrence, Chelsea Nicole Braden, Hunter Lawrence and six great-grandchildren. He was preceded in death by his parents, brother Bill Bittle, a daughter Rebecca Snovelle and a grandson Preston Owens. A graveside memorial service will be held at Gridley Cemetery, Gridley, KS on September 11, 2021 at 1:00pm. In lieu of flowers, memorials can be made to the Kansas Cancer Partnership and be left with or mailed to the funeral home. Services entrusted to Countryside Funeral Home, 420 S. 20th St. PO Box 247 Fredonia, KS 66736.

The family of IJ Bittle created this Life Tributes page to make it easy to share your memories.

Send flowers to the Bittle family.