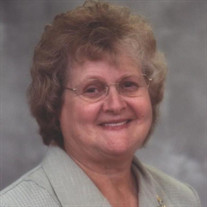 Iris Mae Van Meter, age 86 of Thayer, passed away May 5, 2021 at Morningstar Care Homes of Fredonia. Iris was born January 5, 1935 in Dayton, Ohio to George and Mary (Leach) Kelley. She was raised by her grandparents alongside her sisters Esther and Alene. At an early age, they were sent to boarding school in Breathitt County, Kentucky, where Iris would graduate from Mt. Carmel High School in 1953. She continued her education at Kentucky Mountain Bible College, graduating with an associates degree in Christian Education in 1956. While at bible college, Iris met a young man that would be the love of her life. It was the start of a great journey serving the Lord together. On June 11, 1960, she was united in marriage to Dale Van Meter in Vancleave, Kentucky. Together, they raised 6 children and followed the Lord’s leading as a couple for nearly 62 years. Iris and Dale’s journey took them many places while pastoring churches over the years in Kansas, South Dakota, Nebraska, and Idaho. Wherever they were, Iris would take on the role of hostess of the house. They frequently had visitors over to enjoy her pie and coffee. She also supervised the foodservice workers at the local Senior Center, and when word got around that she was cooking, attendance tripled. At one time, she started a business with a neighbor baking and selling home made pies. They were known to bake 40 pies a day and sell them all. Upon retirement, Iris and Dale moved to the Thayer area, although they didn’t slow down. They planted a huge orchard with 600 apple, pear, and peach trees, and raised and sold fruit and sweet apple cider. Iris was a member of the Kansas Fruit Growers Association. She honorably served on the Kansas State Board of Education from 2003-2007, and at one time was a Kansas State Senate candidate. She was also a member of the Neodesha Church of the Nazarene Church. Iris was a faithful servant of the Lord, a wonderful wife, and a great Mom and Grammy. She touched many lives and will be dearly missed by her family and friends. She is survived by her husband, Dale of the home. Children Kevin Van Meter of Yates Center, KS Lauren Van Meter of Los Angeles, CA Elizabeth Patzer and husband Brad of Post Falls,ID Kristian Van Meteren and wife Echo of Leavenworth, KS Kellene Van Meter and husband Travis of Palmetto, FL Alicia Sterling and husband Layne of Humboldt, KS 13 grandchildren and 6 great-grandchildren She was preceded in death by her parents, and sisters Esther DeMint and Alene Poe. Family will receive friends at visitation on Tuesday, May 11, 2021 from 10:00 am to 12:00 pm at the Neodesha Church of the Nazarene in Neodesha, KS. Funeral service will be held at 2:00 pm at the Neodesha Church of the Nazarene in Neodesha, KS Interment will follow at the Thayer Cemetery in Thayer, KS Memorial contributions can be made to the Neodesha Church of the Nazarene Missions Fund and can be mailed to or left with the funeral home. Services entrusted to Countryside Funeral Home, 420 S. 20th, PO Box 247, Fredonia, KS 66736

Iris Mae Van Meter, age 86 of Thayer, passed away May 5, 2021 at Morningstar Care Homes of Fredonia. Iris was born January 5, 1935 in Dayton, Ohio to George and Mary (Leach) Kelley. She was raised by her grandparents alongside her sisters... View Obituary & Service Information

The family of Iris Mae Van Meter created this Life Tributes page to make it easy to share your memories.