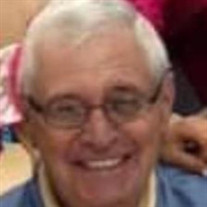 Jack W. Haight age 85 of Chanute, passed away on Saturday, April 18, 2020 at his home. Jack was born on March 8, 1935 in Chanute the son of Clarence Anthony and Frances Maxine(White) Haight. Jack was a graduate of Chanute high school class of 1953, he then attended Chanute Junior College and graduated in 1955. In 1954 Jack enlisted into the National Guard and served until 1960. Jack was a co-owner of Kensinger-Haight Construction and then owner and President of Pioneer Music Company where he retired in 2000 after 45 years. On April 23, 1956, Jack married Sue Ella Kensinger. Jack and Sue have been married for 63 years and she survives at their home. Jack was a lifetime member of the St. Patrick’s Catholic Church, he loved playing golf and baseball. He enjoyed watching the K.C. Chiefs and Notre Dame, and K-State. He served on the Chanute Parks and Recreation Board, and he loved going duck hunting and shooting trap. Most of all, Jack spent his life centered around his children and grandchildren making sure he attended all of the sporting events and supporting them any way he could. Including his wife Sue, Jack is survived by: 2 Sons: Mark Haight and wife LuAnn of Chanute, KS Dan Haight and wife Jill of Lenexa, KS 6 Grandchildren: Brian (Abby) Haight, Megan (Andy) Vogelsberg, Tyler (Chelsea) Haight, Alleigh (Peter) Taylor, Alec (Molly) Haight and Tara (T.J.) Haight and 9 Great Grandchildren: Brady and Whitney Haight, Hunter and Hayden Vogelsberg, Ellie, Jack, Ben and will Haight and Myla Taylor Jack was preceded in death by his parents and one brother Paul L. Haight. Cremation has been requested. Due to the Covid 19 restrictions, the family will be having a private Mass of Christian burial and rosary at St. Patrick’s Catholic Church, with burial to follow on Friday, April 24, 2020 at Memorial Park Cemetery. Memorials have been suggested to either St. Patrick’s School or St. Jude’s Children’s Hospital and may be left with or mailed to the funeral home. Online condolences may be left at www.Countrysidefh.com Services entrusted to Countryside Funeral Home 101 N. Highland, Chanute, KS 66720

Jack W. Haight age 85 of Chanute, passed away on Saturday, April 18, 2020 at his home. Jack was born on March 8, 1935 in Chanute the son of Clarence Anthony and Frances Maxine(White) Haight. Jack was a graduate of Chanute high school class... View Obituary & Service Information

The family of Jack W. Haight created this Life Tributes page to make it easy to share your memories.

Send flowers to the Haight family.