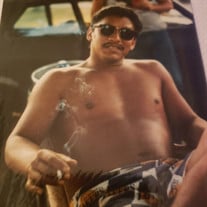 James Hernandez, 60, of Moline, KS, passed away Tuesday, December 14th at Via Christi - St. Joseph in Wichita, KS. He was born on July 13, 1961 to Antonia Galvan Hernandez in Chicago, Illinois. In 1965, James and his family moved to Moline where he and his brothers and sisters made many memories growing up. He would ride his bike, wagon attached, out to adventure around town and even on the highway to Grenola. James has his big sister Carmen to thank for saving his life with disregard for her own life she jumped in and pulled him from the water at the Swinging Bridge in Moline when neither of them knew how to swim. All that bike riding contributed to James’ overall outstanding athletic ability. He was his mama’s, "Mo" as he would call her, superstar excelling in baseball, basketball and football graduating from West Elk in 1979. Even though he had such talent, it seemed to never get to his head as he was always inclusive with everyone, regardless of whether he knew them well. His magnetic personality seemed to draw in anyone he was around. As an adult, James remained kind and inclusive, contributing to his community in many ways - namely his lawn care business through which he maintained residential lawns as well as cemeteries and other parts of the community. He remained an avid sports fan, watching the Dallas Cowboys, LA Lakers and KU basketball. His selflessness extended to his children, who would describe him as the best dad in the world and he was so very proud of them. James loved and respected his older brothers and sisters greatly. He was always the one to call on when they needed anything at all, especially his precious grand babies, who could do no wrong in his eyes. James’ big love for his family and community will be missed greatly, but never forgotten. James is survived by his two children, “Lil” James Hernandez and Vanessa Hull, his girlfriend Teresa Bills, sisters Mary Ellen (Richard) Moreno of Moline and Carmen (Steve) Edwards of Elk Falls, brothers Frank Hernandez of Wichita and John (Penny) Hernandez of Moline, his grandchildren Armando, Riccy, Daniel, Adriana, Jaymie, Austin, Anthony and Alena, a Goddaughter Ollivia Moreno, many aunts, uncles, cousins, nieces and nephews, friends and his dog Lily. He was preceded in death by his mother, Antonia, his grandparents Maria and Manuel Galvan and his Godfather, Alexander Galvan. In lieu of flowers, a memorial donation has been suggested to the Moline Alumni Association in James’ memory and can be left with or mailed to the funeral home. Visitation will be held Tuesday, December 21st at Countryside Funeral Home in Howard, KS from 5-7pm. Rosary will be held December 22nd at St. Mary’s Catholic Church at 10 am with Mass directly following at 10:30 am. A private family burial will be held following cremation at a later date. Services entrusted to Countryside Funeral Home, 206 E. Washington St. PO Box 1233 Howard, KS 67349.

James Hernandez, 60, of Moline, KS, passed away Tuesday, December 14th at Via Christi - St. Joseph in Wichita, KS. He was born on July 13, 1961 to Antonia Galvan Hernandez in Chicago, Illinois. In 1965, James and his family moved to Moline... View Obituary & Service Information

The family of James Hernandez created this Life Tributes page to make it easy to share your memories.

Send flowers to the Hernandez family.