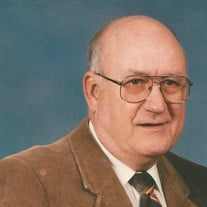 James G. Jackson, 89, passed away Thursday, March 17, 2022 at Keepsake Kottage in Wichita, KS. James was born on February 23, 1933 in rural Bronson, KS the son to Arthur G. and M. Esther (Reynolds) Jackson. James resided in Kansas most of his life, except for 6 years that he spent in California. After high school, James joined the US Army. On June 25, 1954 in LaHarpe, KS James married Maxine Vincent. James and Maxine have been married for 67 years and she survives at her daughter’s home in Wichita, KS. James worked in the oil fields most of his life. He also drove semis and hauled campers for NuWay. In his free time, he enjoyed golfing and going fishing. James was a member of the Chanute Church of the Nazarene, Masons, and the American Legion Post 170 of Chanute. Including his wife Maxine, James is survived by: Daughters: Brenda Rhodes and husband Gary of Piedmont, OK Vicki Hunziker of Wichita, KS Jayme Minyard and husband Wayne of El Paso, TX Sister: Dorothy Dice of Osawatomie, KS Brother in Law: Gene Vincent and wife Bonnie of Colony, KS 6 Grandchildren: Jared Rhodes (Tracy) of Portland, OR, Meghan Parker (Drew) of Bakersfield, CA, Katie Feisal (JK) of Oklahoma City, OK, Melissa Kosek (Nathan) of Alamogordo, NM, Rachelle Minyard of San Diego, CA, Erica Minyard of Scotts Valley, CA. 6 Great Grandchildren: Garrison, Tatum, and Kendall Parker, Eliza, Reed and Marshall Feisal. Also he is survived by numerous nieces and nephews. James was preceded in death by his parents and siblings: Cecil Jackson and wife Dottie, Kathryn Deer and husband Percy, Lorene Mann and husband Delbert, Glenn Jackson and wife Lucille, Virginia Henderson and husband Olin, and brother-in-law Fred Dice. Cremation has been requested and a memorial service will be held on Saturday, March 26, 2022 at 10:00 am at the Chanute Church of the Nazarene. Memorials have been suggested to either the Chanute Church of the Nazarene or the Wichita Animal Action League and may be left with or mailed to the funeral home. Online condolences may be left at www.countrysidefh.com Services entrusted to Countryside Funeral Home 101 N. Highland, Chanute, KS 66720

The family of James Gordon Jackson created this Life Tributes page to make it easy to share your memories.

Send flowers to the Jackson family.