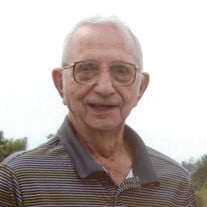 James "Jim" Secrest Haddan, 93, of Stark, KS passed away on Sunday, June 27, 2021 at Heritage Health Care in Chanute. Jim was born on March 9, 1928 in rural Stark, KS the son of Elmer W. and Zulah Z. (Bennett) Haddan. After graduating high school, Jim served in the U.S. Army in Korea from February 1952 until December 1953. In May of 1954 at the Friends Church in Stark, KS., Jim married Alma Avon Doty. Jim and Alma were married for 63 years until her death of October 29, 2017. As a farmer, Jim worked his entire life up to just a few weeks of his passing. Jim loved to visit and talk with everyone he met. He enjoyed operating his cow/calf operation, and working in his yard. When Jim was younger he liked to go on Rattlesnake hunts. He and Alma enjoyed going dancing and being with friends. Jim was a member of the Erie VFW and the American Legion. Jim is survived by numerous nieces and nephews, extended family and friends. Jim was preceded in death by his parents, wife Alma, one son Troy Lynn Haddan, and siblings: Bennett Haddan, Bill Haddan, Christine Hawkinson, Nellie Woodworth, Mari Ella Smith, Iva May Gordon, Pauline Rush and Anna Lucille Haddan. Funeral services will be held on Friday, July 2, 2021 at 2:00 pm at Countryside Funeral Home in Chanute. Visitation will be held 1 hour prior to service time. Memorials have been suggested to any of the following: Friends Church of Stark, Grant Community Center of Stark, or the American Heart Association, and may be left with or mailed to the funeral home. Online condolences may be left at www.countrysidefh.com Services entrusted to Countryside Funeral Home 101 N. Highland, Chanute, KS 66720

The family of James "Jim" Secrest Haddan created this Life Tributes page to make it easy to share your memories.

Send flowers to the Haddan family.