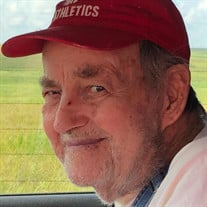 James "Jim" C. Rader, Jr. (90) a former resident of Howard, KS died Tuesday, August 31, 2021 peacefully at his home in Haysville, KS, with family at his side. He was born November 11, 1930 to James C. Rader, Sr. and Helen Lucille (Hart) Rader in rural Elk County. Growing up in the Flint Hills, Jim always referred to his home as “God’s Country”. He had a keen sense of direction and could get to his destination taking any dirt road without a problem. During his time in Elk County, he served two terms as a county commissioner and was a Deacon at the Mulvane Methodist Church. Jim honorably served his country in the Naval Armed Forces on the U.S.S. Achernar, KA-53. His work took him to the Wichita area where he worked 35 yrs for Boeing as a Sheet Metal Foreman and supervisor until his retirement. Jim married Mae Wiladea "Willie" Dirks and together they adopted three children; she preceded him in death in 1984. His kids always knew him to be straightforward and that he taught them many lessons that have served them well throughout their lives. In 2018, his long-time partner, Susan Green of Wellington joined him in his home at Haysville. He and Susan enjoyed each other’s company, which included dancing, collecting fossils and fishing together. Susan said Jim corrected her 2-left feet dancing style and created her love of fishing. She cared tenderly for him until his death. Along with Susan, he is survived by his daughter Pamela Rader of Paola, KS, son Bill Rader of Wichita, KS and a brother Richard (Betty) Rader of Eudora, KS. Jim was preceded in death by his first wife, Mae Wiladea and son Lee Rader and a sister Colleen Mapes. A graveside memorial service to honor Jim’s life will be held at a later date. Services entrusted to Countryside Funeral Home 206 E. Washington St. PO Box 1233 Howard, KS 67349.

The family of James C. Rader Jr. created this Life Tributes page to make it easy to share your memories.

Send flowers to the Rader family.