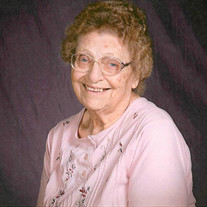 Janice G. Dimond, age 92, of Chanute, passed away July 22, 2020 at Saint Anthony’s Hospital in Oklahoma City, OK. Her death was not COVID-19 related. Janice was born in Arkansas City, Kansas on May 31, 1928, the daughter of Asa Shehan and Wilma Bell Shehan. She graduated from Chanute High School and was employed at the Kansas Highway Office early in life. Reading and children were always important to Janice. While the family lived in Ada, Oklahoma, her children went to a small Catholic school. There was no library so she started one, organizing the fund raising drive to buy the books, getting the library set up and then volunteering as librarian every week for the school children. The school didn’t have a cafeteria either so she, with the help of another member, started that too. The family moved back to Chanute in 1972. She worked for the Chanute Public Schools as the registrar at the High School from 1981 until retiring in 1994. Janice was united in marriage to John (Jack) Dimond on September 17, 1949 at St. Patrick Catholic Church in Chanute. John preceded her in death on July 14, 2013. Janice was a member of St Patrick Catholic Church, the St Patrick’s Altar Society, and a founding member of the Laurel Mother’s Club. Janice is survived by her children Jill M. Moore of Oklahoma City, OK, Jon P. Dimond of Wynnewood, OK, Jeffrey J. Dimond of Chanute, and Jana D. Cook of Merriam, KS; grandchildren, Jennifer Low, Jodee Hillyard, Cody Dimond, Elizabeth Cook and Madeline Cook; four step-grandchildren, three great-grandchildren and a sister, Betty Bouray of Lafayette, Colorado. Mass of Christian burial will be held on Wednesday, July 29, 2020 at 11:00 AM at St. Patrick’s Church in Chanute, with burial to follow at St. Joseph’s cemetery in Humboldt. Rosary will be held at 10:30 AM prior to service time. There is no visitation scheduled. Online condolences may be left at: www.countrysidefh.comMemorials in her name may be made to Castaways Animal Shelter & Sanctuary, Chanute Public Library in Chanute, the March of Dimes or the American Diabetes Foundation. Book donations can be made at the Chanute Public Library; Monetary Donations can be left with or mailed to the funeral home. Services entrusted to Countryside Funeral Home 101 N. Highland, Chanute, KS 66720

The family of Janice G. Dimond created this Life Tributes page to make it easy to share your memories.

Send flowers to the Dimond family.