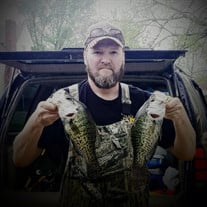 Jason “Jay” Bash, 47, of Chanute, KS passed away Monday, December 20th at Research Medical Center in KC, MO. He was born in Atlantic, Iowa to the loving parents Richard and Gwen Bash on July 27, 1974. They still reside in Chanute. He was preceded in death by his maternal and paternal Grandparents. Jason, “Honey”, left his soulmate and best friend of 13 years, Carrie Yebra and she says, “We will see each other again.” He is survived by his 2 boys, Shane and Keelan Bash in Huntsville, AL, 2 brothers and sisters in law, Leon Bash (Ann) and Kasey Bash (Jasmine) in Chanute, KS, 6 Nieces and Nephews, several great nieces and nephews and lots of extended family and friends. His oldest son, Shane, has his love of fishing and the great outdoors. His youngest son, Keelan, has his love of football (GO CHIEFS!!), fantasy football and a good scary movie. His younger brother, Leon, has the same sense of humor and was his partner in crime. They shared the love of racing, fishing and football. Kasey, his baby brother, shared the love of a good beverage, a good laugh and good music. When Jason would come home on leave from the Navy when Kasey was just a little guy, he would ask, “You wanna go to the Navy with me?” Kasey would tell him yep! Jason’s career in the Navy began in July, 1993, where he attended Boot Camp with his cousin Blair. He then went to Florida to C School, which sparked his love for creating wonderful food, then was assigned to the US Enterprise in Norfolk, VA. His Navy career ended at Gulfport, MS in 1999. He enjoyed spending time with his nieces and nephews. From SnapChat streaks with Karli, fishing with Kaden, rib pokes and jokes with Kylie and Kenzi, to snuggles, playtime and chatting with Owen and Briley he made them all feel special. He also adored his great nephews and nieces and would always make time to hold them, play with and most important, tease them. There was no shortage of laughter when Jason was around. His love of family extended to his Uncles, Aunts, many, many cousins and even more friends who were also considered family. A boy from Adair, IA also had 2 Godfathers, Great Uncle Larry Ludlum, who is in heaven with Jay, and his Uncle Perry Leeper, who has always been there for him. So we ask how a boy from Adair, IA ended up in Chanute, KS in August of ‘86 where he left his mark on tons of hearts (you all know who you are). Family is what brought him back to Chanute, KS. He was always in his gear, meaning it was GAME TIME!! Whether it was the Iowa Hawkeyes, the Kansas City Chiefs or KU (Basketball, NOT Football), if there was a game on Sunday, you would find him with family watching it. But his other gear was his fishing gear and he spread his love of fishing to all ages. He collected family like he collected fishing gear. We will be holding a Celebration of Life for Jason on January 22nd at the old VFW building on West Main. We will announce the time at a later date. Donations can be made in his honor to Charlie 22 Outdoors (an organization that helps disabled vets with outdoor activities, such as fishing) or Wounded Warrior. Online condolences may be left at: www.countrysidefh.com. Services entrusted to Countryside Funeral Home 101 N. Highland, Chanute, KS 66720.

Jason &#8220;Jay&#8221; Bash, 47, of Chanute, KS passed away Monday, December 20th at Research Medical Center in KC, MO. He was born in Atlantic, Iowa to the loving parents Richard and Gwen Bash on July 27, 1974. They still reside in Chanute.... View Obituary & Service Information

The family of Jason Lavern Bash created this Life Tributes page to make it easy to share your memories.

Send flowers to the Bash family.