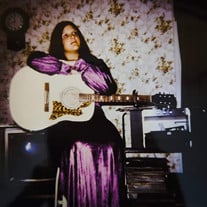 Jean Ann Routh, age 66 of Altoona, KS, passed away Wednesday, August 25, 2021 at Diversicare in Chanute, KS. Jean was born in Fredonia, KS on October 17, 1954 to James Fenner and Nelle (Palmer) Fenner. She grew up in Fredonia and attended Fredonia High School, graduating in the class of 1973. After high school, Jean attended Independence Community College, where she was active in theatre, which became a life-long passion. On June 6, 1994, Jean married Jack Routh in Miami, OK. They recently celebrated 27 wonderful years together. They liked to go fishing together whenever they could, but Jean would only go if they could fish from the bank and not have to get on the water. As theatre got in her blood at a young age, Jean continued with this passion through the years. She played parts in numerous musicals in Chanute, and was in the Neewollah musical every year for several years. Jean loved to sing, which she did at several churches. She was a very giving person, and would crotchet blankets and throws and deliver them to nursing homes for the residents. She also would rescue animals on a whim, and brought home dogs on several occasions just to give them a home. Jean fought hard and refused to give up. She was the best wife a man could ask for, a loving mom and grandma, and will be dearly missed. She is survived by her husband, Jack Children: Brad Goforth Jonathan Routh of Chanute Kristen Hooper of Peru Carol Brown of Coffeyville Christian Routh of El Dorado 7 grandchildren and 1 great-grandchild She was preceded in death by her parents, sister Barbara Fenner and great-granddaughter Rosalynn Nichols. Cremation has been requested with a memorial service to be held at a later date. Memorial contributions in Jean’s name can be made to the American Cancer Society or Fredonia Pound pals and can be mailed to or left with the funeral home. Services entrusted to Countryside Funeral Home, 420 S. 20th, PO Box 247, Fredonia, KS 66736

Jean Ann Routh, age 66 of Altoona, KS, passed away Wednesday, August 25, 2021 at Diversicare in Chanute, KS. Jean was born in Fredonia, KS on October 17, 1954 to James Fenner and Nelle (Palmer) Fenner. She grew up in Fredonia and attended... View Obituary & Service Information

The family of Jean Ann Routh created this Life Tributes page to make it easy to share your memories.

Send flowers to the Routh family.