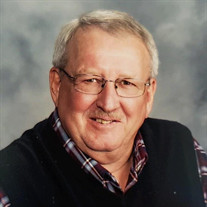 Jerry Dean Hutton, 76, of Chanute passed away Monday, July 5, 2021 at the Kansas Heart Hospital in Wichita, KS. Jerry was born on October 12, 1944 in Chanute, KS the son of Rollin and Lucille Fern (Garrison) Hutton. After graduating high school, Jerry enlisted in the U.S. Air Force in August of 1962 and served until August of 1966. On December 5, 1964 in Chanute, KS., Jerry married Cindy Allen. Jerry and Cindy were married for 56 years and she survives at their home. Jerry was an electrician by trade and a member of the IBEW Local 226. Jerry loved to play pool and enjoyed going to Las Vegas with his team for pool tournaments. He was a member of the American Legion and American Poolplayers Association. Jerry enjoyed hunting and fishing, working in his yard, going to the casino, and could fix about anything put in front of him. Most of all, Jerry loved being with his family and watching his grandchildren grow. Survivors including his wife Cindy are: 3 Sons: Jeff Hutton and wife Kacy of Lenexa, KS Mike Hutton and wife Laura Stigge of Overland Park, KS Doug Hutton and wife Michelle of Overland Park, KS 9 Grandchildren: Hannah, Hollie, Garrett, Alexis, Olivia, Luke, Dusten, Skylar, and Tenley. Jerry was preceded in death by his parents. Funeral services will be held on Monday, July 12, 2021 at 11:00 am at Countryside Funeral Home. Visitation will be held 1 hour prior to service time, burial to follow at Memorial Park Cemetery in Chanute. Memorials have been suggested to either the American Heart Association or the Blessed Hope Bible Baptist Church and may be left with or mailed to the funeral home. Online condolences may be left at www.countrysidefh.com Services entrusted to: Countryside Funeral Home 101 N. Highland, Chanute, KS 66720

The family of Jerry Dean Hutton created this Life Tributes page to make it easy to share your memories.

Send flowers to the Hutton family.