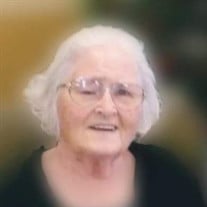 Jessie Maxine (Stiles) Bahr formerly of Severy, KS was called to her heavenly home on April 1, 2021 at Eureka Nursing Center in Eureka, KS. She had just celebrated her 82nd birthday. Jessie was born March 30, 1939, the daughter of Lyal Merle Stiles and Alaine Jessie (McCall) Stiles. She was born in the living quarters of the grocery store her parents operated in Beaumont, KS. Her family later moved to Elk Falls, KS where she grew up and graduated from Elk Falls High School with the Class of 1957. After high school she attended business college in Wichita, KS and worked for a time at Howard Production Credit in Howard and also was a switchboard operator for the telephone company in Elk Falls. On June 12, 1962 Jessie was united in marriage to Garry Kay Bahr in Norman, OK. They lived in Moline, KS and on a ranch near Piedmont, KS before settling in the Severy area. To this union 5 children were born; Marsha (George) Ramsey of Eureka, KS; Garry Bahr Jr of Wichita, KS; Sheila Alves of Phoenix, AZ; Lyal (Cristen) Bahr of Grenola, KS and Troy (Dava) Bahr of Hartford. Jessie and Garry always had a big garden when the children were at home and she would can hundreds of jars of garden vegetables every summer. She was a devoted mother and grandmother who was proud of her children and grandchildren. She attended their school and church programs, scouting and sporting events, graduations and weddings until her health declined. Jessie was an active member of the Severy Baptist Church where she sang in the choir, served as church clerk for many years, worked in the nursery and helped with vacation Bible school. She was also a member of the Eastern Star Lodge of Elk Falls for many years. She is survived by her children, Grandchildren Ashley(Karl) Sartor; Derek (Ashley) Bahr; Drew (Jenny) Ramsey; Lisa Bahr; Brandon(Kathy) Bahr; Leah (Gabe) Hobbs; Nathan, Serenity, Journey and Taryn Bahr; Ashley (Matt) Dominguez; Michelle Gritz; Jason Gritz; Bob Bartee and Jolene Miller; 25 great-grandchildren; one sister-in-law, Janet Bahr; a host of nieces and nephews; and many many friends. The family will receive friends at visitation on Monday, April 5, 2021 from 4:00 to 6:00 PM at Countryside Funeral Home in Howard, KS Funeral service will be held on Tuesday, April 6, 2021 at 10:30 AM at the Severy Baptist Church in Severy, KS. Social distancing and face masks are suggested while attending the service. Interment will follow in South Lawn Cemetery, Severy, KS Memorial contributions are suggested to the Severy Baptist Church, and can be mailed to or left with the funeral home. Services entrusted to Countryside Funeral Home, 206 E. Washington, PO Box 1233, Howard, KS 67349

Jessie Maxine (Stiles) Bahr formerly of Severy, KS was called to her heavenly home on April 1, 2021 at Eureka Nursing Center in Eureka, KS. She had just celebrated her 82nd birthday. Jessie was born March 30, 1939, the daughter of Lyal Merle... View Obituary & Service Information

The family of Jessie M. Bahr created this Life Tributes page to make it easy to share your memories.

Send flowers to the Bahr family.