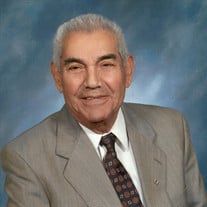 Joe Jessie “Frank” Gobea, age 91 of Chanute, KS, passed away on August 30, 2019 at his home in Chanute, KS. He was born January 21, 1928 in Parsons, KS, the son of Antonio and Susana (Guerra) Gobea. He was raised and attended school in Chanute. On December 30, 1950, he married Mary Alonzo at St. Patrick Catholic Church in Chanute. Before Joe turned 18, he served in the Maritime Service and then went on and worked for the Santa Fe Railroad. After working for the railroad, he enlisted and served his country in the United States Air Force during World War II, receiving the World War II Victory Medal and Army of Occupation Medal. After being honorably discharged, he went to work for Monarch Cement Co. in Humboldt, KS and retired from there in 1990 after 42 years. Joe generously gave his time as a volunteer with many organizations including: the St. Patrick Bargain Store, Harvest House and the Chanute Mexican Fiesta. He was a lifetime member and post commander of VFW in Chanute, lifetime member and 4th Degree Knight and Grand Knight for the Knights of Columbus in Chanute and a member of RSVP at NCCC. Joe was also an active member and very involved at the St. Patrick Catholic Church. He supported the local sport teams and was a member of the Neosho County Silver Panther Club. He loved his Royals, Chiefs, Jayhawks, Pitt State Gorillas, Panthers and Blue Comets. He was a dedicated family man and most of all enjoyed watching his grandsons play sports. Joe loved spending time with his family and friends. His humor and cheerfulness will be greatly missed. Survivors include: Children: Catherine Ramirez of Shawnee, KS Marcella Gobea of Humboldt, KS Paul Gobea of Shawnee, KS Siblings: Sally Padilla of Topeka, KS Cecilia Ornelas of Wichita, KS Mary Ellen Smedley of Thayer, KS Pete Zaragosa, Jr. of Chanute, KS Grandsons: Curtis Gobea, Stephan Nickell and Josh Sparks Joe was preceded in death by his parents; his wife, Mary; son, Thomas Gregory Gobea; grandson, Nicholas Gobea Ramirez and brother, Tony Gobea. Rosary will be recited on Wednesday, September 4, 2019 at 7 p.m. at St. Patrick Catholic Church in Chanute. Mass of Christian Burial will be on Thursday, September 5, 2019 at 10:30 a.m. at St. Patrick Catholic Church in Chanute. Burial will follow at St. Patrick Cemetery. Legion Riders and Chanute Honor Guard will be in charge of military honors. Online condolences may be left at: www.countrysidefh.com. The family suggests memorials to be made to St. Patrick Catholic Church and St. Patrick Catholic School and may be left with or mailed to the funeral home. Arrangements have been entrusted to Countryside Funeral Home, 101 N. Highland, Chanute, KS 66720.

The family of Joe Jessie "Frank" Gobea created this Life Tributes page to make it easy to share your memories.

Send flowers to the Gobea family.