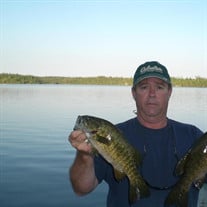 Joe A. Ray, 67, of Chanute passed away on Friday, November 12, 2021. Joe was born on December 15, 1953, in Chanute, Kansas the son of Junior and Peggy (Hogan) Ray. Joe grew up in Chanute and graduated from Chanute High School in 1971. Upon graduation from high school, Joe began a career as a floor coverer, a career that spanned his entire adult life. Joe would say he had laid carpet on every block in Chanute. Joe was a very avid hunter and fisherman and also enjoyed anything gun related, even reloading his own ammunition. On November 23, 1997, Joe married Janice O’Brien, they were married for 16 years until her passing on July 24, 2013. Joe really loved Jan’s amazing cooking, going on trips with her and also spending a great deal of time at Lil’ Toledo Lodge. Not only did Joe lay almost all of the floors at Lil’ Toledo, he was also a guide for the lodge. One thing that Joe loved as much as hunting and fishing was spending time with his grandchildren, they were his world. When he wasn’t busy hunting, fishing, or spending time with grandchildren, Joe was always up for a trip to Buffalo Run Casino with his friends. Joe was a member of Ducks Unlimited and was a very outgoing man that would speak his mind. Joe will always be remembered as a man that would do anything for anyone. Joe is survived by: His son: Tyler Ray and his wife Staci of Altoona, KS Six Grandchildren: Paige Alyssa Trenton Callie Delanie Noah Joe was preceded in death by his parents Junior and Peggy, wife Janice, brothers: John Ray and Bill Ray, and sons: Jared Ray and Matt Ray. Cremation was requested and a Celebration of Life will be held on December 18, 2021 at Lil’ Toledo Lodge at 11:00 am. Memorials have been suggested to Ducks Unlimited and may be left with or mailed to the funeral home. Online condolences may be left at: www.countrysidefh.com. Services entrusted to Countryside Funeral Home 101 N. Highland, Chanute, KS 66720.

The family of Joe Allen Ray created this Life Tributes page to make it easy to share your memories.

Send flowers to the Ray family.