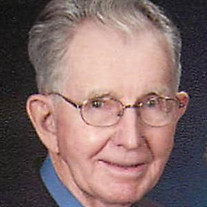 Carl Joseph “Joe” Studebaker, Jr., age 97 of Fredonia, passed away Monday, January 6, 2020 at Fredonia Regional Hospital. Joe was born on March 21, 1922, in Fredonia the son of Carl Joseph and Lula (Waas) Studebaker, Sr. A graduate of Fredonia High School, Joe then signed up with the US Army Air Force and served in WWII from November 7, 1942 until November 29, 1945 as an aircraft mechanic and instructor, and was discharged as a Staff Sgt. On February 18, 1943 in Fredonia, Joe married Doris Alliston. Joe and Doris have been married for 76 years and she survives at their home. Joe along with Doris worked on the farm for 39 years until he retired. Joe enjoyed wood working, and was also well known for metal repair as in the earlier years most of the farmers came to him as he owned a welder to get their farm equipment fixed. Joe was one of the founding members for Rural Water Dist #7, and served on the board for many years. A lifetime member of the American Legion, he was also a member of the Fredonia Senior Center, Old Iron Club, Anti Horse Theft Association, and the Good Sams RV club. Including his wife Doris, Joe is survived by: 4 Children: Gyla McVey and husband Jim of Fredonia, KS Karen Jones and husband Pete of Iola, KS Carl Studebaker of Fredonia, KS Nancy Timmons of Fredonia, KS 8 Grandchildren, 21 Great Grandchildren and 3 Great-Great Grandchildren Joe was preceded in death by his parents, 2 brothers Calvin and Cavin Studebaker, sister Barbara Tharp, and son-in-law Doug Timmons Funeral services will be held on Thursday, January 9, 2020 at 10:30 AM at Countryside Funeral Home in Fredonia with Pastor Alice Purvis officiating with burial to follow at the Fredonia City Cemetery. Visitation will be held on Wednesday, January 8, 2020 from 5-7 PM at the funeral home. Online condolences may be left at: www.countrysidefh.com Memorials have been suggested to either the Fredonia Senior Center, Wilson County Old Iron Club, or the Avenue of Flags and may be left with or mailed to the funeral home. Services entrusted to: Countryside Funeral Home 420 S. 20th St., P.O. Box 247, Fredonia, KS 66736

The family of Joe Studebaker created this Life Tributes page to make it easy to share your memories.

Send flowers to the Studebaker family.