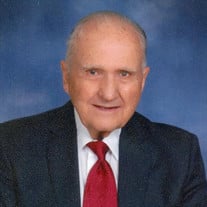 John Merrill Gorton, age 93, of Chanute, KS passed away on Saturday, August 24, 2019, at Diversicare in Chanute. John was born on December 13, 1925 in Sunbeam, CO the son of Merrill and Erma (Archibald) Gorton. His family moved from Colorado to Mulvane, KS in 1933 and then to Wilson County, KS in 1935. John graduated from Lafontaine High School in 1944 and then attended Pittsburg State University from 1946-1947. He went on and graduated from Kansas State University in 1950. On June 29, 1947 he married Wanda Bagby in Fredonia, KS and they were married for 71 years before she passed away in 2018. John served in the United States Army from June 1944 to April 1946. He worked several different jobs and in December of 1965, he become self-employed as a real estate agent and accountant. John was a lifetime member of the VFW and American Legion and a member of the First United Methodist Church in Chanute. John is survived by his daughters, Susan Gorton Willis and husband Rick of Chanute, KS and Lisa Gorton Haines and husband Joel of Oklahoma City, OK; brothers: Carl, Ray, Herman and Lloyd Gorton; 3 grandchildren and 4 great grandchildren and one on the way. John was preceded in death by his parents; his wife, Wanda and brothers, Archie, Harold and Lester Gorton. Funeral service will be on Friday, August 30, 2019 at 2 p.m. at the First United Methodist Church in Chanute followed by the burial at Memorial Park Cemetery in Chanute. The Chanute Honor Guard and the Legion Riders will be in charge of the military honors. Online condolences may be left at: www.countrysidefh.com. The family suggests memorials to be made to the Neosho County 4-H Foundation and may be left with or mailed to the funeral home Arrangements have been entrusted to Countryside Funeral Home, 101 N. Highland, Chanute, KS 66720.

John Merrill Gorton, age 93, of Chanute, KS passed away on Saturday, August 24, 2019, at Diversicare in Chanute. John was born on December 13, 1925 in Sunbeam, CO the son of Merrill and Erma (Archibald) Gorton. His family moved from Colorado... View Obituary & Service Information

The family of John Merrill Gorton created this Life Tributes page to make it easy to share your memories.

Send flowers to the Gorton family.