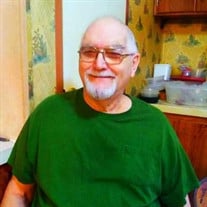 John Russell Larrivee, age 77, went to be with his lord in his eternal home on the morning of January 1st, 2022 in Parsons, Kansas. At the time of his death, he was surrounded by the love of his life Ramona. John was born on July 3rd, 1944 in Cincinnati, Ohio to the late Edward Russell Larrivee and Wanda Rose Butler-Larrivee. John’s mother Wanda remarried in 1948 to Arthur Bonshire and to this union was Patrick and Mary. After Arthur passed away in 1959, Wanda married Chet Naron in 1967 and to this union brought step-siblings, Cindy, David and Mike Naron. John was joined in marriage to Mary Bishop for a short time and to this union was Debbie and step-children Tamara and Robert. He was joined in marriage to Ramona Lopez on 1983 and to this union were Melissa, and step-children Denise, Charlene and Troy. John may not have been the biological father to all these children, but you never would have known by his actions. Together they happily shared 38 years of marriage. John spent 24 years working for the city of Chanute, Kansas. John’s passion in life when his health allowed it was racing cars, rebuilding motorcycles, cars and boating. John’s most honored and cherished accomplishment in his life was being a devoted spouse, loving father, grandfather and great grandfather. He was his grandchildren’s biggest fans on the sideline. Due to his health, he wasn’t able to attend all of their sporting events. He loved his children and was immensely proud of his grandchildren’s accomplishments. He is survived by Ramona Larrivee, Debbie Conn, Melissa Henderson, Denise Branstelter Charlene Schoenofer and Troy Gilliland. Tamara Kunkel and Robert Wilson. Mary Bonshire Guerrero, Cindy Naron, Mike Naron, numerous nieces and nephews, 19 grandchildren and 4 great grandchildren. John was preceded in death by his parent’s Edward Larrivee and Wanda Naron and brother Patrick Bonshire and David Naron. Maternal grandfather Everett Butler and Maternal grandmother Hazel Miller-Butler, Paternal grandfather Damase Larrivee, Paternal grandmother Josephine Larrivee, Maternal uncles Glen Butler and Harry Butler. Paternal uncles Kenneth Larrivee and Richard Larrivee. Step-Father Arthur Bonshire and Chet Naron. Visitation will be held on Thursday, January 13, 2022 from 2:00 pm to 4:00 pm at the funeral home with service to follow at 4:00 pm. In lieu of flowers, the family asks that donations be made to National Federation of the Blind and may be left with or mailed to the funeral home. Online Condolences may be left at: www.countrysidefh.com. Services entrusted to Countryside Funeral Home 101 N. Highland, Chanute, KS 66720.

John Russell Larrivee, age 77, went to be with his lord in his eternal home on the morning of January 1st, 2022 in Parsons, Kansas. At the time of his death, he was surrounded by the love of his life Ramona. John was born on July 3rd, 1944 in... View Obituary & Service Information

The family of John Russell Larrivee created this Life Tributes page to make it easy to share your memories.

John Russell Larrivee, age 77, went to be with his lord in his...

Send flowers to the Larrivee family.