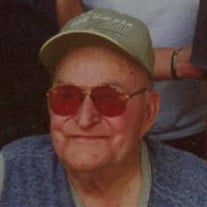 John Warren Layton, age 89 of Howard, KS passed away January 29, 2020 at Via Christi St. Francis hospital in Wichita, KS. John was born June 3, 1930 to Leonard and Thelma (Huffman) Layton. He graduated from Sedan High School. After graduating, John spent 2 years serving his country in the United States Air Force. On December 25, 1954, he was united in marriage to Betty Sweaney in Kansas City, KS. They had 2 daughters, Jan and Peggy, and were married for 59 years until her passing in 2014. John worked for the railroad, retiring as railroad clerk after many years. He and Betty moved around a lot, moving wherever the railroad needed him to go. Their last move was to Howard, KS and they decided to make it home. John loved to hunt, fish, watch any sport or rodeo on T.V., and spending time with family. His other passion was horses, and was a race-horse trainer from 1955 to 2010. He was a member of the Kansas Thoroughbred Association and the Kansas Quarter Horse Racing Association. John is survived by his daughters: Jan Osborn of Howard, KS Peggy (Lee) Juaire of Severy, KS Grandchild: Cody Juaire Sister in law: Shirley Brown of Cedar Vale, KS Numerous nieces and nephews He was preceded in death by his parents, wife, brother Charles Layton, and son-in-law Jim Osborn Cremation has been requested Memorial service will be held on Monday, February 3, 2020 at 2:00 pm at Countryside Funeral Home, 206 E. Washington, Howard, KS 67349 Memorials can be made to Harry Hynes Hospice and can be mailed to or left with the funeral home. Services entrusted to: Countryside Funeral Home, 206 E. Washington, P.O. Box 1233, Howard, KS 67349

The family of John Warren Layton created this Life Tributes page to make it easy to share your memories.

Send flowers to the Layton family.