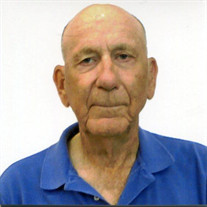 John R. Markley, DVM, of Howard, KS, was born April 23, 1934, to Aaron and Hallie (Bell) Markley at Mound City, KS. John passed May 22, 2019, at the Kansas City Hospice House after spending time at the University of Kansas Medical Center being treated for cancer and then pneumonia. After graduating from Mound City schools, he attended Kansas State University where he received BS and Doctor of Veterinary Medicine degrees in 1957. John was a member of Acacia fraternity. In 1957, he married Lois Cowan at Newton, KS. They had a son, Lance John, and a daughter, Sherri Susan. After working as a government veterinarian for USDA in Burns, OR, and a veterinary practice in Pocahontas, IA, John established a mixed animal veterinary practice in Howard in 1960. After retiring, John and Lois enjoyed traveling all over the world on trips which he researched and planned. John loved raising cattle on his ranch, which he constantly worked to improve. John had many interests, some of which included studying history and Indian culture, reading everything, studying maps, writing cowboy poetry and songs, and playing his guitar and singing. John was a long-time member of the Howard Rotary Club and served District 5710 as a District Governor. He had served on the Howard School Board and Howard Chamber of Commerce Board. John really enjoyed visiting with friends made in the Kansas Master Farmers of which he and Lois were members of the Class of 2001. John is survived by his wife of 62 years, Lois, son Lance (Christy) Markley of Parsons, KS, daughter Sherri Hahn of Kansas City, MO, grandson Jordan Henry Hahn (Allye Doorey) of Dallas, TX, granddaughter Sydney Markley of Lawrence, KS, and brother Robert Markley of Mound City, KS. John was preceded in death by his father Aaron Markley, mother Hallie Markley, brother Leroy Markley and sister Dorothy Markley. Requested cremation has taken place. A private family burial at the Cresco Cemetery will be held later. The family requests any memorials be made to Greenwood County Home Health in care of Countryside Funeral Home, Howard, KS.

The family of John R. Markley DVM created this Life Tributes page to make it easy to share your memories.

Send flowers to the Markley family.