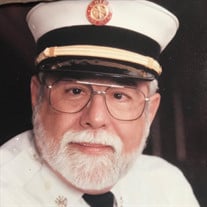 John Robert Settle, age 79 of Fredonia, KS, passed away Friday, May 28, 2021 at his home. John was born in Neodesha KS, November 30, 1941, the son of Helen (Steele) & Newell Duncan Settle. He attended Fredonia public schools, graduating from Fredonia High School in 1959. He attended College of Emporia and graduated from Kansas Teachers College (now Emporia State University) in 1963 with a Bachelor’s degree in Business Science. Following his graduation from college, he joined the Hampson-Settle Insurance Agency. He then bought out Mr. Hampson. He retired from the agency in 1993 becoming full-time Fire Chief after serving many years as a volunteer chief. He retired from the fire department in 2005 but continued to work for the Kansas Fire Rescue Training Institute as a part-time training coordinator until his health forced him to retire in 2020. As a youth, he was involved in scouting. He earned the Eagle award, his God & Country badge was a Brother in Order of the Arrow. As a young man he joined the Fredonia Presbyterian Church, attending until it closed. He then attended Neodesha Presbyterian Church until it closed. He was a current member of the Yates Center Presbyterian Church. He was ordained an Elder and served many terms on the session. During that time, John also conducted church services when the minister was gone. He was a member of the Fredonia Jaycees for many years, holding all the local offices as well as becoming state VP, and was also active in the national conventions. John’s life was one of service not only to his church but to the city of Fredonia. He was a member of a number of numerous city committees, including the Housing Authority, Planning Commission and the Zoning Commission. He was also Homecoming Chairman and Chamber of Commerce President. In 1980, he married the love of his life, Terri Lynn Hajec. They lived a full and happy life together and she survives at their home. He was preceded in death by his parents and brother, William E. (Bill) Settle. He is survived by many nieces and nephews. Memorials have been established with the First Presbyterian Church at Yates Center and the Fredonia Fire Department, and can be mailed to or left with the funeral home. There will be no formal visitation. Friends are welcome to call at the home. A Memorial service for John will be held at 11:00 AM on Thursday, June 3, 2021, at the First Christian Church in Fredonia, KS. Inurnment will follow in the Fredonia City Cemetery. Services entrusted to Countryside Funeral Home, 420 S. 20th, PO Box 247, Fredonia, KS 66736.

The family of John Robert Settle created this Life Tributes page to make it easy to share your memories.

Send flowers to the Settle family.