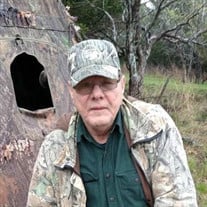 Johnnie “John” Penner, age 71 of Fall River, Kansas passed away March 7, 2020 in Wichita, Kansas. John was born April 26, 1948 in Clinton, Oklahoma to Herman and Mary (Stelting) Penner. He grew up Mennonite, and that simple, quiet lifestyle stayed with him his entire life. After High School, he entered the United States Army, serving his country for 4 years, earning a Bronze Star. On August 2, 1968, John married Joan Livengood in San Antonio, TX. They celebrated their 51 wedding anniversary this past year. They lived a quiet lifestyle together, fishing at times, but mostly just spending time together. He was a member of the American Legion/VFW in Fredonia, and was proud to be on the Fall River Lake Volunteer Fire Department until 2018. John is survived by his wife Joan Son, John M. Penner Daughter, Cheri L. Hall Sisters: Mary Broker, Ruby Penner, Betty McOmber, Ruth Fanning, and Martha Kay Hodges. 8 Grandchildren and 2 Great Grandchildren He was preceded in death by his parents, sister Elsie Penner, and brother Clyde Penner Memorial service will be held on Saturday, March 14, 2020 at 1:00pm at Countryside Funeral Home, 420 S. 20th, Fredonia, Kansas In lieu of flowers, memorial contributions can be made to the Fall River Lake Volunteer Fire Department and can be mailed to or left with the funeral home.

The family of Johnnie "John" Penner created this Life Tributes page to make it easy to share your memories.

Send flowers to the Penner family.