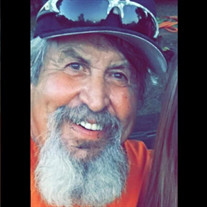 Jon Edwin “Big Jon” Tillapaugh, age 73 of Grenola, KS, passed away Saturday, February 27, 2021 at his home. Jon was born January 9, 1948 in Detroit, MI to Kenneth and Lorraine (Johns) Tillapaugh. When he was young, he moved to Arizona, but continued to visit Michigan and spend his summers there. In 1968, Jon enlisted in the United States Army, serving his country for 2 years. After serving, he moved back to Arizona, where he owned his own business. He primarily finished concrete, but also did some construction jobs, and being a jack of all trades, he owned his own sawmill and built log furniture, and tons of woodworking projects. In the late 1970’s, Jon married Carol Tillapaugh. Together, they had 4 children. Although they divorced after 17 years together, they continued to stay very close friends. In 2008, Jon moved to Grenola, KS to be close to his kids. He continued his woodworking, and really enjoyed spending time with his children and grandchildren. He made tons of friends over the years, and will be dearly missed by everyone that knew him. Jon is survived by his children: Preston Tillapaugh (Jessica Norris) of Grenola, KS Ty Tillapaugh of Grenola, KS Shannon Tillapaugh of Howard, KS Lori Tillapaugh of Howard, KS Tiah Tillapaugh of Apache Junction, AZ Sister, Jan McDade of Mesa, AZ Grandchildren: Taivyn, Cailey, Jaicey, Uriah, Nevaeh, Gabe, Kira, Tuff, Tessa, and Avery Great-Grandchild: Airion Several nieces and nephews Tons of friends and loved ones Per Jon’s instructions, cremation has been requested. Jon’s family will be holding a Celebration of Life on Saturday, March 27, 2021 at 2:00 PM at the Grenola Community Hall, Grenola, Kansas. Memorial contributions can be made to the Elk County 4-H Council, and can be mailed to or left with the funeral home. Services entrusted to: Countryside Funeral Home, 206 E. Washington, PO Box 1233, Howard, KS 67349

The family of Jon E. Tillapaugh created this Life Tributes page to make it easy to share your memories.

Send flowers to the Tillapaugh family.