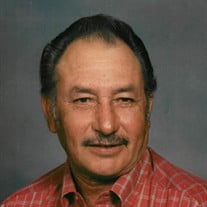 Jose Victorano “Vic” Baca, age 83 of Fredonia, KS, passed away Wednesday, April 7, 2021 at Diversicare of Chanute, KS. Vic was born May 26, 1937 in Bovina, TX to Jose and Bentura (Martinez) Baca. He grew up in a large family, having 4 brothers and 5 sisters. During most of his childhood, the family lived in New Mexico. Vic was a working man and he started at an early age, when he quit school at the age of 15 to drive a Coors delivery truck. Later in his teenage years, he enlisted in the United States Navy, serving his country for 4 years. After serving, he went to work as a Foreman/Welder for various companies around the country, which included meat packing plants, and scuba tank manufacturers. In 1982, he and his family moved to the Fredonia area. Soon after, he went to work for the Stryker Ranch, where he would stay for the next 27 years, when he decided it was time to slow down. Early in his life, Vic married his first wife, Sally. Although the marriage didn’t last long, he was blessed with his son, Bill. Then, he married Mildred Crafton, and was blessed with his first daughter, Victoria. The couple stayed together for 12 years, but then divorced. Shortly afterwards, while living in Wichita, KS, he was introduced to a young lady, and on December 23, 1977, he married Martha Jean Smith. Together they added 2 more daughters to the family, Marsha and Maria. They spent the next 36 years together, until Martha’s passing in January 2014. When Vic wasn’t working, he was known to be doing his favorite hobbies, drinking beer and fishing. He also enjoyed reading western books and watching western movies and loved to listen to Spanish music. He was known to have a coffee mug in his hand from sun up until sun down. Vic loved his family, and will be missed by everyone that knew him. He is survived by his children: Bill Baca of Texas Victoria Baca of Wichita, KS Marsha Loftin of Fredonia, KS Maria Roets of Fredonia, KS 10 Grandchildren and 12 Great-Grandchildren Brothers: Frank Baca, Jimmy Baca, Leonard Baca Sisters: Stella Garcia, Mary Elebario, Santana Hernandez, Jonnie Santos He was preceded in death by his parents, wife Martha, brother Tony Baca, and sister Patsy Baca The family will receive friends at visitation on Sunday, April 11, 2021 from 4:00 to 6:00 pm at Countryside Funeral Home in Fredonia, KS Funeral service will be held on Monday, April 12, 2021 at 1:00 pm at Countryside Funeral Home in Fredonia, KS Interment will follow in Harrison Cemetery near Thayer, KS Memorial contributions can be made to Harry Hynes Hospice and can be mailed to or left with the funeral home. Services entrusted to: Countryside Funeral Home, 420 S. 20th, PO Box 247, Fredonia, KS 66736

The family of Jose "Vic" Baca created this Life Tributes page to make it easy to share your memories.

Send flowers to the Baca family.