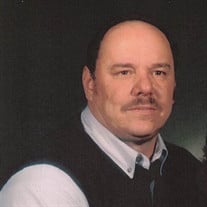 Joseph Wesley Dillow, 75, of Chanute passed away on Tuesday, April 19, 2022 at KU Medical Center in Kansas City. Joseph was born on October 15, 1946, in Chanute, Kansas, the son of Joseph Carson and Dorothy Irene (Kirkpatrick) Dillow. Joseph grew up in the Chanute area and attended school in Earlton. On October 13, 1968, Joseph married the love of his life, Rita Turner in Chanute. When Joseph was younger, he loved to race and raced at the local tracks. He also played softball and was known for being an amazing hitter. In his spare time Joseph loved to watch NASCAR with his grandson William. He will always be remembered for being a kind-hearted man with a great sense of humor. Joseph is survived by his wife Rita Dillow of the home, daughter Cindy Habiger of Chanute, KS, sons: Joey Dillow of Humboldt, KS and Ronald Dillow of Duran, WI, brother Kenneth Dillow and his wife Ruth of Chanute, KS, sister Gladys Walker and her husband Rick of Miami, OK, grandson William Habiger and his wife Kendra of Oswego, KS and two great-grandchildren Dakota and Cooper Habiger. Joseph was preceded in death by his parents and his sister Evelyn Wade. Visitation will be held on Friday, April 22, 2022 from 2:00 pm to 3:00 pm at the Nazarene Church in Chanute, with the funeral service to follow at 3:00 pm. Memorials have been suggested to St. Jude’s Children’s Research Hospital and may be left with or mailed to the funeral home. Online condolences may be left at: www.countrysidefh.com. Services entrusted to Countryside Funeral Home, 101 N. Highland, Chanute, KS 66720.

The family of Joseph Wesley Dillow created this Life Tributes page to make it easy to share your memories.

Joseph Wesley Dillow, 75, of Chanute passed away on Tuesday,...

Send flowers to the Dillow family.