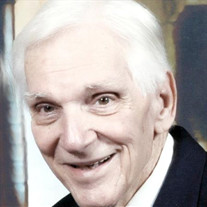 A proud member of the group of Americans known as the “Greatest Generation,” Joseph Stephen “Joe” Relph, 91, died Thursday, July 18, 2019, at Labette County Community Hospital in Parsons. He and others of that generation grew strong by surviving some of the most traumatic and stressful events that ever occurred in this country. He was born Oct. 16, 1927, at home to Tom and Geneva (Ross) Relph, and grew up during the Great Depression. He graduated from Fredonia High School in January 1945 when he was 17 years old and enlisted in the U.S. Merchant Marine, serving in the South Pacific theater until the end of World War II. After his honorable discharge in 1946, he attended the University of Kansas on the G.I. Bill, along with his brothers, studying chemical engineering. He married Rita Parsons at St. Andrew Catholic Church in Independence on June 30, 1948. The couple lived in a variety of states, first moving to west Texas where he began working as a chemical engineer in the oil fields. He left his work in oil exploration and in 1961, the couple moved to Fredonia and bought the Wilson County Citizen, becoming only the second family to own and operate the newspaper that had been started in 1869 by John S. Gilmore. The couple split business responsibilities, Rita writing and editing copy and Joe making sure the complicated equipment was operating correctly. When they bought the paper it was still being produced using a linotype and a flat-bed press. Over the next half-century, they guided the paper into modern production processes including the current computerized output while continuing the tradition of journalism without adding drama or depending on rumor. During those 58 years, he was a working member of the Kansas Press Association. In Fredonia, he was a member of the Rotary Club, the American Legion, Old Iron Club, Black Powder Club, the Fredonia Chamber of Commerce and served as a member of the board of education for Fredonia. He was a member of the Sacred Heart Catholic Church. His wife Rita died May 23, 2018, just a month short of celebrating the couple’s 70th wedding anniversary. Survivors include five children, Mina DeBerry of Fredonia, Patricia Relph-Gross of Fayetteville, Ark., Ross Relph and wife Josie of Lenexa, Virginia Relph of Fredonia, Meredith Odell and husband Phillip of Fredonia; six grandchildren, Elizabeth DeBerry of San Francisco, Calif., Rebecca Relph of Overland Park, Emily Relph of Overland Park, Jillian (Johnson) Cabrera of Wichita, Stephanie Wilson of Independence, and Kimberly Gross Pennell of Fayetteville, Ark.; one great-grandson, Giovanni Cabrera of Wichita; nephews Tom Relph of Dell City, Okla., John Relph of Fredonia, Joe Relph of Altoona, David Relph of Altoona, Mark Relph of rural Fredonia, Daniel Relph, Michael Relph, Phillip Relph, Richard Relph; nieces, Gene Ellen Wiles, Rosalind Meyer, Mary Montgomery, Pamela Slauenwhite; grandnieces and –nephews; sister-in-law Claudine Relph, and host of kinsmen and friends. Five brothers, Ross Relph, Gene Relph, Kenneth Relph, Frank Relph and William Relph, preceded him in death, as did son Joseph Stephen “Steve” Relph II; grandson Stephen Kirk “Steve” DeBerry; niece Geneva Bauman, and sons-in-law, Roger Gross and James Johnson. Rosary will be held on Friday, August 9, 2019 at 7:00 PM at the Sacred Heart Catholic Church in Fredonia. The family will greet friends at Sacred Heart Catholic Church before the funeral services that will be held at 10 a.m., Saturday, Aug. 10, with military rites at the gravesite in the Sacred Heart Catholic Church segment of Fredonia City Cemetery under the direction of Countryside Funeral Home, Fredonia. Memorial donations are suggested to the Steve Relph Memorial Scholarship at Fredonia High School or to the Old Iron Club, and may be left with or mailed to the funeral home. For ever, and for ever, farewell, Brutus. If we do meet again, we'll smile indeed; If not, 'tis true this parting was well made. — William Shakespeare Julius Caesar, 1599

The family of Joseph Stephen Relph created this Life Tributes page to make it easy to share your memories.

A proud member of the group of Americans known as the “Greatest...

Send flowers to the Relph family.