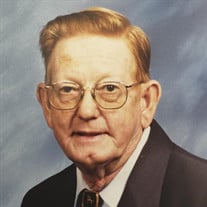 Joseph F. Tait, age 88, of Chanute, passed away on Monday, December 21, 2020 at Moran Manor, Moran, KS. Joseph was born on July 10, 1932 in Garnett, KS the son of Francis J. and Gertrude M. (Roeckers) Tait. Joseph attended the Garnett Catholic School until 1940 when the family moved to Humboldt, KS where he attended St Joseph’s Catholic School through his 8th grade year. In 1957, Joseph met Evelyn Kelley in Iola, KS. On September 26, 1961 Joseph married Evelyn at the St. Patrick’s Church in Chanute, KS. The couple made their home in Chanute, KS and were married for 55 years until her death of December 13, 2016. Joseph worked in the oil fields around Chanute until he was hired by the KDOT in 1965 as a road maintenance worker and equipment operator for over 30 years. He also ran his own lawn service company until 2018. Joseph was a member of the Knights of Columbus and stayed active at St. Patrick’s Church. Joseph is survived by: Children: Lucinda “Cindy” Brown and husband Cary of Sun City, AZ David Tait and wife Christine of Chanute, KS Valerie Newby and husband Doug of Kechi, KS Sharla Tait of Chanute, KS Half-siblings: Harold Tait Joyce Bailey 10 Grandchildren and 12 Great Grandchildren Joseph was preceded in death by his parents, a brother William Tait who died at birth, wife Evelyn, and a grandson Michael Cain. Mass of Christian burial will be held on Tuesday, December 29, 2020 at 10:30 am at St. Patrick’s Catholic Church in Chanute, with burial to follow at St. Joseph’s Cemetery in Humboldt, KS.. Rosary will be recited at 10:00 am. All services will be available through the church’s Facebook and YouTube. Visitation will be held on Monday, December 28, 2020 from 4-6 pm at the funeral home. Memorials have been suggested to St Patrick’s church of Chanute and Harry Hines Memorial Hospice and may be left with or mailed to the funeral home. Online condolences may be left at: www.countrysidefh.com Services entrusted to: Countryside Funeral Home 101 N. Highland, Chanute, KS 66720

The family of Joseph F. Tait created this Life Tributes page to make it easy to share your memories.

Send flowers to the Tait family.